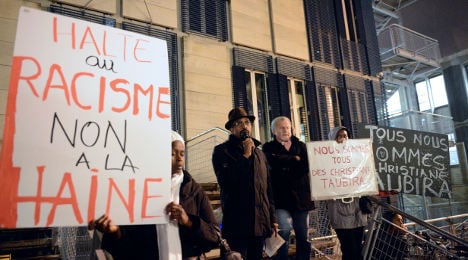 An annual report into racism in France suggests intolerance is on the rise. Photo: Mehdi Fedouach/AFP

The annual report, by the government’s National Consultative Commission on Human Rights (CNCDH) is carried out each year to gage levels of racism and intolerance in the country.

And the 2013 end of year report makes for sober reading once again, with levels of intolerance apparently on the rise for the fourth year running and the number of French people concerned by immigration (16 percent) at the highest level since 2002.

And according to the BVA poll which the report is based on as many as 35 percent of French people admit to being “quite” or “a little” racist. In a survey of just over 1,000 people, nine percent said they were “quite” racist, which is an increase of two percentage points compared to the same survey in 2012. A further 26 percent admitted to being “a little” racist, which is an increase from 22 percent in 2012.

The poll was published in the week after the anti-immigration National Front (FN) party secured historic results in the local elections, picking up a record 11 towns.

Although those results must be seen in the context that 36,000 mayorships across France were up for grabs, they were seen as a significant breakthrough for a party, whose founder Jean-Marie Le Pen has been convicted several times of hate speech.

The report has provoked some concern among anti-racism groups.

“The commission’s report is presents figures that are very worrying for French society,” wrote Louis-Georges Tin, president of CRAN (Representative Council of Black Associations) for the Nouvel Obs website.

Tin said the most worrying stat from the report was the fact that six out ten French people said “certain behaviour can sometimes justify racist reactions”, which he says “makes racist opinions excusable”.

He also said the rise in intolerance was linked to that of the National Front, although racism in France was not limited to the far right he said.

The annual report provoked a fair amount coverage in the French press. "The French are less and less tolerant," read the headline in Le Monde.

Among other things the CNCDH report also revealed that that racist remarks and words became more commonplace in 2013, especially towards Muslims and the Roma community.

Despite the concerning figures, Christine Lazerges, President of the National Consultative Commission on Human Rights (CNCDH) said that racism in France was decreasing “over the long term”.

“The time of ratonnades (violent attacks on North African immigrants) has passed, but the racism that exists today is more underhand and it is no longer a reserve for the extreme fringes of society. It penetrates all levels,” Lazerges told a press conference this week.

“The scapegoats today are primarily the Roma, who have been stigmatized, including by the government and then North African Muslims,” she said.

More and more French people – 63 percent – say the integration of immigrants is not working, compared to 56 percent who were of that opinion in 2012.

Islam is also the religion less positively received among the French with 80 percent of respondents to the survey saying the wearing of the headscarf poses a problem for society.

Roma community also suffered from a negative image among the French with 85 percent of respondents believing they exploit their children. That’s up from 75 percent in 2012.

As many as 78 percent of respondents believe Roma people in France live mainly through trafficking and theft, up from 72 percent last year.

For Lazerges and the CNDCH, the results of the poll showing a “growing lack of acceptance for those who are different” as well as a “defiance” towards anti-racism campaigns which are seen as a censorship.

The president of the group also says anti-racism groups in France “have difficulty attracting support”.