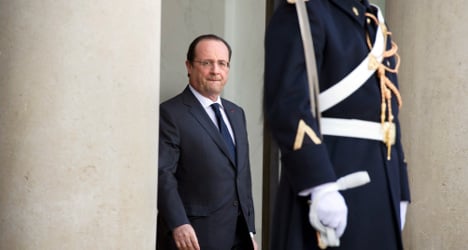 President François Hollande is expected to favor growing the economy over cutting the deficit. Photo: AFP

Hollande is going for growth rather than focusing fully on meeting EU deficit rules, in line with a precedent set by the new government in Italy, but his options are narrow.

The head of eurozone finance ministers Jeroen Dijsselbloem warned on Tuesday that France and Italy must respect rules on controlling their finances.

"We need to continue working on the stabilization of budgets and at the same time become more competitive," Dijsselbloem said in Athens.

"That requires more reforms, also in France," he added after Hollande made his latest policy option clear late on Monday when he named a new prime minister.

But the Socialist-led government which he oversees will still face conflicting pressures from his election promises and left-wing demands, and pressures from the European Union.

The new government under Prime Minister Manuel Valls "will also have to convince Europe that this contribution by France to competitiveness, to growth, must be taken into account regarding the respect of our commitments," Hollande said referring to proposed reforms in a televised address to the nation.

His statement shaking up the government, and also announcing a Solidarity Pact to placate his left-wing supporters, came a day after a humiliating defeat in local elections.

And he spoke just hours after data showed that France is behind EU targets for cleaning up public finances.

Hollande was elected two years ago on a promise to press for growth across the EU to counter budget-correcting austerity.

In the last year, his tone has see-sawed, and in recent months has focused on a Responsibility Pact under which charges blamed for crippling businesses would be reduced substantially over three years.

However, the government had repeated that policy was concentrated on reducing France's public deficit to the EU ceiling of 3.0 percent of output by the end of next year, a deadline delayed by the EU for two years on condition that France enact deep reforms.

The government had said it would tighten the budget by 50 billion euros ($69.0 billion) to meet these two targets but has not so far explained how.

And Hollande's latest statement makes clear that France will not risk falling back into recession in an effort to respect EU budget rules.

The latest official data puts the deficit at 4.3 percent last year, overshooting a target of 4.1 percent.

Hollande is following the new Italian Prime Minister Matteo Renzi who prefers stimulus to austerity, describes the EU rules as the "Stupidity Pact", and wants Italy and France, to "change Europe together".

Italy has the third-biggest economy in the 18-member eurozone, and France the second-biggest after the dominant economic power Germany which has a public surplus.

At French economic think tank OFCE, Xavier Timbeau argued for the Renzi approach and for abandoning the 2015 target since the required measures would put the French economy "on its knees".

France and Italy each have record high unemployment but their economies are showing signs of recovering. France has public debt of 93.5 percent of output, far above the EU limit of 60 percent, but far below the Italian debt of 130 percent

Financial markets require France to pay interest of about 2.0 percent for 10-year loans, and Italy 3.3 percent.

However, Italy is running an annual public deficit below the EU limit of 3.0 percent, and has a trade surplus compared to a huge deficit by France. At insurance firm Euler Hermes, economist Ludovic Subran was cautious about the example set by Renzi.

France should do its best to show in a three-year budget plan to be presented to the EU in April that it could reach a three-percent figure of some sort in 2015, he said.

In London, Berenberg bank economists said that France would have to press ahead with big spending cuts and reforms of employment laws.

Otherwise competitiveness would fall further behind, they said. "Reforms are painful. But they do pay handsome dividends."