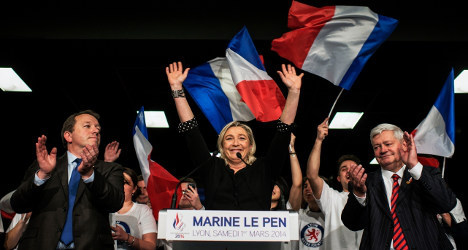 The FN took the mayorship in at least 11 towns and won over 1,400 seats on municipal councils in Sunday's polls.

That represented an unprecedented result and a remarkable turnaround in the fortunes of a party that, beset by internal divisions at the time, only claimed around 60 seats in the last local vote in 2008.

And while this success has triggered outrage abroad, with the Belgian town Farciennes immediately cutting ties with sister French city Beaucaire after it elected an FN mayor, the French themselves have shown very little shock.

In a poll published on Monday in the Le Parisien daily, nearly 60 percent of those questioned said they believed the FN should be considered a mainstream party, but paradoxically 62 percent felt that gaining mayorships and municipal council seats was a step too far and a "bad thing".

"This clearly shows the contradiction felt by the French," said Jean-Yves Camus, an expert on the far right. He pointed to FN leader Marine Le Pen's successful efforts since she took
over in 2011 to "de-demonize" a party widely regarded as taboo when her father Jean-Marie Le Pen was at the helm, due to his repeated convictions for Holocaust denial and inciting racial hatred.

"On the one hand… the majority of French people think that the FN must now be considered a party like any other, but on the other hand, strong mistrust persists," Camus said.

"It's clear that the majority of the French do not want an FN government to come to power for the moment."

The FN's score is widely seen as a result of unhappiness with the government of Socialist President François Hollande, as well as general exasperation at mainstream parties which many believe are unable to resolve problems of sky-high unemployment, poor growth and security.

And while the far-right surge made headlines in France, it triggered very little surprise or shock, bar a few scuffles in the southern city of Frejus where 26-year-old FN candidate David Rachline was elected mayor.

This compares to the shock triggered by municipal polls in 1995 and 1997 when the FN – then under leader Jean-Marie Le Pen – unexpectedly took four mayorships and more than 1,200 seats on municipal councils.

"Why? The image of the party has changed. It's not the same thing having Marine Le Pen at the helm as having Jean-Marie Le Pen," said Jérôme Fourquet of the Ifop polling institute.

"Secondly, there's been 20 years between those two periods, so there is an element of people getting used to it," he said, adding that this time round, the FN had widely been expected to do well and its success was no surprise.

"We're not in the 1990s anymore, there's been a sort of everyday acceptance, with (FN) profiles that are far smoother than before. They (candidates) are not hotheads."

Under Marine Le Pen, the party has systematically expelled anyone caught uttering anti-Semitic or racist comments.

In October, for instance, the FN dropped a candidate for municipal elections after she compared the country's black justice minister to a monkey.

But some of the most controversial policies elaborated by Jean-Marie Le Pen are still there.

In the southern city of Vitrolles, for instance, the FN mayor who came to power in 1997 tried unsuccessfully to implement "national preference" by providing the equivalent of €770 ($1,060) for every newborn in families where at least one parent was French.

Marine Le Pen has since acknowledged that this was a "mistake" but national preference nevertheless remains one of her cornerstone policies, although it has been renamed "national priority."

The FN also remains committed to changing rules which generally allow the immediate family members of immigrants to join their relatives in France, a position which, if enshrined in law, would breach international rights conventions upholding the right to family life.

Other proposals, such as restricting new immigrants access to welfare benefits and healthcare, have recently been advocated by some leading figures in the mainstream right.

While some of the FN mayors elected in the 1990s were widely panned as failures, Le Pen is determined to prove that her candidates this time round will succeed.

"The fact that some of these towns gave themselves to the FN shows that their situation has deteriorated significantly, either financially or socially," said Fourquet, pointing to problems of poverty and unemployment.

"They are not arriving in flourishing towns, so even if they are good… they must straighten out situations that are very difficult. It's quite a big challenge."