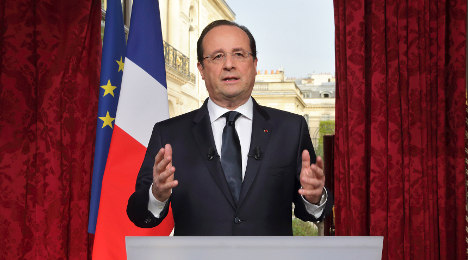 Can a new government really open a new chapter for France and its President François Hollande? Photo: AFP/Pool

Hollande moved quickly this week in a bid to convince the French people that he was still the right man to turn the country’s listing ship around and set it on the right path.

Just a day after his Socialist party had suffered a humiliating defeat in the local elections Hollande came out fighting, promising "a new chapter" for France that will include tax cuts for workers.

After heavy defeats at the polls he moved on Monday to push aside the Prime Minister Jean-Marc Ayrault and his government that were in place for less than two years.

Then he took to TV screens to tell the French people, who had voted against his party in their droves, that he had heard their message and would act on it.

“I understand your message because it’s clear. There’s not been enough change and it’s been too slow. There are not enough jobs and therefore too much unemployment. Not enough social justice and too many taxes,” Hollande told the nation in an eight-minute TV recording.

“I say it once again: we have to get our country back on the right track.”

'It may not be enough to change Prime Minister'

The new chapter will be lead by the Spanish-born Manuel Valls, a man who enjoys a scrap and has been dubbed a "left-wing Sarkozy" due to his position on the right of the party. Valls will be in charge of a new government that Hollande promises will be “combative”.

CLICK HERE for a profile of France's new Prime Minister

The general view in France is that Hollande is staking everything on Valls in a last chance to turn his flagging presidency around.

But political analyst Nonna Mayer from the Sciences Po university in Paris told The Local on Tuesday that changing a Prime Minister and government may not be enough for Hollande.

"I don’t think a president has ever sacked his prime minister after such a short time. But we are also in a very specific situation. We are in the worst economic crisis since the 1930s.

“It’s not an easy situation for François Hollande after such a defeat,” she said. “Valls won’t, however, be able to change the policies, so it’s not enough to just change your prime minister,” said the Research Direct of the Institute of European Studies at Sciences Po.

“So what policies is he going to propose to the French people? Is he going to be able to bring back his left-wing voters and convince them he has the capacity to get over the bad times that we are in?" she said.

The make-up of the new government will be announced in the coming days but in a sign Valls, who has a few enemies as well as friends among the political ranks, will have a tough job on his hands, two green party members including the current housing minister Cécile Duflot, have refused to be part of his cabinet. ("'The new chapter' of François Hollande. What the president said" was the headline in Le Monde on Tuesday)

Bring back strength to French economy

Valls will take over from Ayrault on Tuesday afternoon and will be tasked with pushing through reforms “to bring back some strength to the French economy,” Hollande said.

Those reforms will include pushing through public spending cuts and ushering in his “responsibility pact” which will reduce crippling payroll charges on businesses by €30 million in exchange for increased recruitment.

Hollande said a parliamentary vote on the responsibility pact to be taken in mid April, will be a vote of confidence in his new government.

He also said the election debacle showed the need for a “solidarity pact” which offers workers tax cuts, assurances on welfare, as well as education in a bid to improve people’s spending power.

"The government will have to convince Europe that this effort by France to boost growth and competitiveness should be taken into account in how it respects it commitments," he said.

Sciences Po’s Mayer said that Hollande needs Valls and the government to get results right from the start.

“Hollande has a very short time to prove he made a good choice with the new government. Because the European elections are in May and the poll that came out after the first round, it’s a little early of course, showed the right would get 24 percent, the National Front would get 22 and the Socialists would come in behind them with 19 percent.”

Mayer believes Hollande could perhaps benefit by taking a leaf out of the book of the likes of Marine Le Pen if he wants to get the French public back on his side.

“When you hear somebody like Marine Le Pen speak, even people who hate her guts, will say ‘She is clear, we understand her when she talks, she is not part of that political class in a suit and tie,’” she said.

Only time will tell whether Hollande's promise of "a new chapter" for France can be fulfilled.