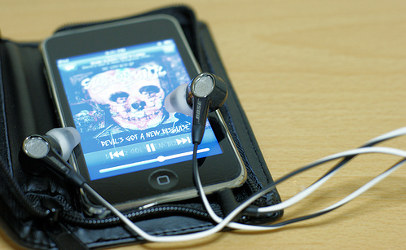 A French teen is in a heap of trouble for listening to his earphones too loudly. Photo: Mrlemonfilm/Flickr

His parents are fighting the fine and accompanying ticket, but so far SNCF has not budged, saying a 1942 law justifies the citation handed to the boy, France TV reported.

It was a Thursday in May 2013 around 4:50pm when a boy, Anthony, cut through the Reims train station on his way home from school. Just as he was exiting the station a conductor stopped him, informed him he was breaking the rules, and ticketed him on the spot.

For the boy’s father, Laurent Thomas, the idea that the music coming through the boy's mobile phone into his earphones could cause a ruckus in a busy train station at rush hour seems ridiculous.

“I can understand that in the train the use of a mobile phone to listen to music could be cause for a ticket,” Thomas wrote in an appeal to SNCF. “However, I have a hard time understanding the disruption caused on a platform at a train station on a Thursday at 4:51pm.”

After filing an appeal, which was rejected, the family refused to pay the initial €75 fine. Now, ten months later the ticket has accumulated penalties and late fees bringing the total amount to €375. They still refuse to pay.

The SNCF stands by the conductor’s decision to fine the boy, saying the teen was in the wrong. They say a 1942 law forbids “any person to use in train cars, waiting rooms, on platforms or in the train station sound-making devices of instruments.”

Also, the railway system claims the noise coming from the boy’s earphones was bothering other passengers and causing a nuisance. Though under the 1942 law, talking loudly on a phone or listening to a radio could also be considered a nuisance.