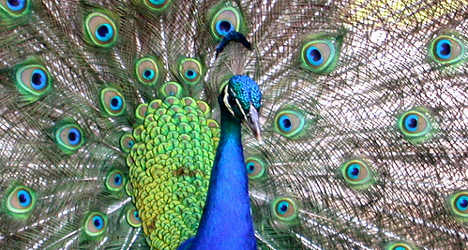 A French couple won a €4,000 settlement from city authorities in Marseille after they were left depressed insomniacs who were forced into psychotherapy due to an extremely noisy Town Hall-owned peacock.

The trouble started in the 10th arrondissement of Marseille when the local mayor was given a peacock as a gift in 2008, reported French newspaper La Provence on Monday. Soon after the bird began escaping from his pen and would find his way to a local couple’s home, where it would let out its ear-splitting squawks.

Though admired for their multi-coloured plumage, peacocks are also known for their "shrill raucous shrieks," which not everyone finds pleasant, according to the Royal Society for the Prevention of Cruelty to Animals.

The verbally assaulted couple in Marseille wrote letters to the Town Hall, demanding action against the noisy creature. In response to the complaints the city even sent workers out to try and find the bird, but it was to no avail and the situation dragged on.

In the meantime the racket let out by the peacock pushed the couple to the edge of sanity. In their 2012 lawsuit they claimed to be suffering from various mental maladies like insomnia and depression due to the animal’s cacophony.

In January 2012 they won their suit against the city, but were awarded a mere €100 in damages. Outraged by the meager payout, the couple took their case to an appeals court, which recently ordered the city to pay €4,000.

Much to everyone's relief, the city eventually caught up with the troublesome peacock and sent him to live on a farm far from Marseille.