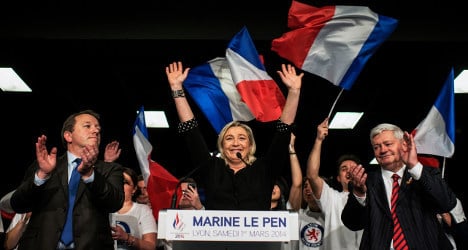 Marine Le Pen's National Front party achieved some significant results in the 2014 local elections that will be seen as a breakthrough. Archive Photo: AFP

On a day dubbed "Black Sunday" by one Socialist lawmaker, the National Front (FN) won control of at least 12 towns and was on track to claim 1,200 municipal council seats nationwide, its best ever showing at the grassroots level of French politics.
It was also a night to savour for France's main opposition, the centre-right Union for a Popular Movement (UMP).
The party of former president Nicolas Sarkozy performed strongly across the country, seizing control of a string of towns and cities, including some once considered bastions of the left.

In a rare consolation for President François Hollande's party, the Socialists held on to control of Paris, where Anne Hidalgo, 54, will become the first female mayor of the French capital after a victory that was far more comfortable than anyone had expected.

But Limoges, a town that had been run by the left for 102 years, fell to the UMP, as did Toulouse, the Champagne capital Reims and Saint-Étienne, as well as dozens of other smaller urban centres.

"It has been a black Sunday," said Socialist deputy Jean-Christophe Cambadelis.

Candidates backed by Marine Le Pen's FN secured the mayor's seat in the mid-sized southern towns of Beziers and Frejus and other smaller towns, adding to its first-round victory in the northern town of Henin-Beaumont.

"We have moved onto a new level," Le Pen claimed. "There is now a third major political force in our country."

The historic festival city of Avignon, where the FN had headed the first round vote, remained under left-wing control and Le Pen's party also failed to win the northeastern town of Forbach and the southern city of Perpignan, both of which had been among their top objectives.
An OpinionWay poll for Le Figaro suggested the UMP and its allies had taken 45 percent of the votes cast nationwide in municipalities of more than 1,000 residents, while the Socialists and other left-wing parties took 43 percent and the FN, which was only standing in a small number of communes, registered seven percent.
A 'severe warning'

"We have had a very severe warning," acknowledged Segolène Royal, Hollande's former partner who is tipped for a return to government in the reshuffle that is expected to follow in the wake of Sunday's rout.

The Socialists were not helped by a turnout estimated at around 62 percent of the electorate, which is low by French local election standards and was largely explained by large numbers of left-leaning voters staying at home.
The FN's success at these elections has been widely interpreted as reflecting exasperation among voters with the Hollande government.
The Socialists' failure to get a stagnant economy moving and reverse the upward march of unemployment is seen as having aggravated anger over other issues, such as crime and immigration, and increased disillusionment with mainstream politicians of all stripes.
Prime Minister Jean-Marc Ayrault is widely expected to be made the principal scapegoat for the government's failures when Hollande takes stock on Monday morning. "The message the voters have sent is very clear and must be clearly heard," Ayrault said.
Popular Interior Minister Manuel Valls, a dapper and tough-talking character who has broad appeal across the political spectrum, is the favourite to replace him.
Adding a bit of soap opera drama to proceedings is the likelihood of a comeback by Royal following the president's separation from girlfriend Valérie Trierweiler in January.
Trierweiler, who was dumped after it emerged Hollande was having an affair with actress Julie Gayet, had reportedly wielded a veto over Royal's mooted inclusion in Hollande's first cabinet.
Now however, the mother of Hollande's four children is being tipped to get a major new portfolio spanning education, science and youth.

The FN meanwhile faces a test of its ability to run the towns it has won. That has generally not been the case when the party has secured a handful of mayoral positions in the past.

Le Pen, who has made strenuous efforts to forge a new, more respectable image for the party founded by her father Jean-Marie, is looking to establish a local base that will allow the FN to prove it is more than a protest movement in the run-up to the 2017 presidential election.
Le Pen, who took over the FN leadership in 2011, has been credited with broadening the appeal of a party regarded as taboo by many voters in light of her father's repeated convictions for Holocaust denial and inciting racial hatred.