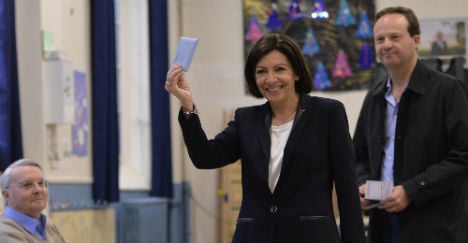 The vote, in which the first ballots were cast in the French Pacific territory of New Caledonia, is also predicted to result in the far-right National Front establishing an unprecedented footprint in France's local government by winning control of as many as a dozen mid-sized towns.

"It's a civic duty to go and vote," 59-year-old David Michel told AFP as he was the first to cast his ballot at a polling station in the eastern city of Strasbourg.

In Paris, Socialist mayoral candidate Anne Hidalgo will be hoping to resist the national swing against her party and keep the French capital under the control of the left.

But all the signs are that it will be extremely close after a better-than-expected first-round showing by Nathalie Kosciusko-Morizet, a former minister for the centre-right UMP party who is Hidalgo's rival to join a very small club of women who have run major cities around the world.

The far-right FN also performed better than expected in the first round vote last Sunday. The results generally were interpreted as a signal of exasperation amongst voters with the Hollande government's failure to get a stagnant French economy moving again and reverse the upward march of unemployment.

Ayrault is widely expected to be made the principal scapegoat for that and Valls, the government's most popular figure, is the favourite to replace him.

Hollande is also reportedly considering bringing veteran industrialist Louis Gallois and/or former World Trade Organisation director Pascal Lamy into the cabinet in a move that would reinforce his recent attempts to foster a more pro-business image.

Hollande's former partner, Segolene Royal, is also tipped for a comeback following his separation from girlfriend Valerie Trierweiler in January after revelations of his affair with actress Julie Gayet. Trierweiler reportedly vetoed Royal from being included in Hollande's first cabinet despite the mother of his four children being a long-established Socialist Party heavyweight and former presidential candidate herself.

In the first round, Marine Le Pen's FN took five percent of the nationwide vote — up from 0.9 percent in the first round of the last municipal polls in 2008 — despite only being able to field candidates in a minority of municipalities.

Where it did present lists, the FN performed better than expected. It claimed the mayor's seat in Henin-Beaumont in northern France at the first attempt with just over 50 percent of the vote.

Le Pen is hoping to see FN-backed mayors installed in at least another dozen towns on Sunday evening.

The party has controlled a handful of local authorities in the past but does not have a good record in terms of competent administration.

Le Pen, who has made strenuous efforts to forge a new, more respectable image for the party founded by her father Jean-Marie, is looking to establish a local base which will allow the party to demonstrate it can be more than an outlet for voters' frustrations.

In an interview with Le Monde this weekend, she said: "What we lack at the moment is a positive report card. That is important. With that we can move to a higher level."

Le Pen, who took over the FN leadership in 2011, has been credited with broadening the appeal of a party regarded as taboo by many voters in light of her father's repeated convictions for Holocaust denial and inciting racial hatred.

The best-known city that could fall to the FN is Avignon, famed for its annual international arts festival, which organisers say will be pulled out if Le Pen's party takes over.