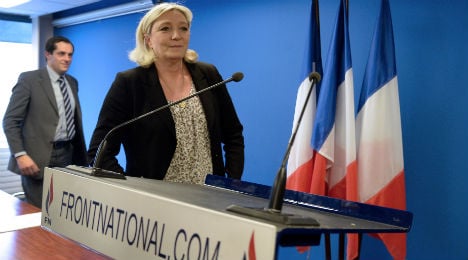 In Beziers and Perpignan the phrase has become something of a refrain of late, a shorthand way of explaining why the two southern towns are on the verge of falling into the hands of the country's resurgent far-right party, the National Front (FN).

And they are not alone. Polls suggest between 10 and 15 mid-sized French towns could have FN mayors by the time ballot boxes close on Sunday in the second round of nationwide local elections.

The party of Marine Le Pen has already secured one mayor's seat, its candidate having won an outright majority in the depressed former coal mining town of Henin-Beaumont at the first attempt last Sunday.

That marked the first time the FN has secured control of a town in France's industrial north, previously a bastion of the left, including the once mighty Communist Party.

The issues that underpinned the FN's highly symbolic win in Henin-Beaumont are just as present at the other end of the country: unemployment, poverty and crime, but also disillusionment with the perceived failures and cronyism of the existing political establishment, at local and national level.

In Beziers, a famous rugby town, an intriguing independent candidate heads a list containing several FN activists that has been enthusiastically backed
by Le Pen.

Robert Menard, who has spent most of his life campaigning for press freedom around the world as the president of Reporters without Borders, looks almost
certain to bedome the town's next mayor, having taken 45 percent of the votes in the first round, well ahead of the mainstream UMP (30.3 percent) and the list of President Francois Hollande's Socialist Party (PS).

In a town that has been run by the UMP for 19 years, Menard seems to have come across as a breath of fresh air, a political outsider.

"I am an old Socialist and will be all my life," said Pascal, a shopkeeper in the town's historic centre.

"But I am not going to vote for the PS because we are in a grave situation here," he said, eyeing a once elegant square, now deserted and surrounded by boarded-up shops.

With 16 percent of the workforce unemployed and a third of the population living with net household income below €1,000 ($1,400) per month, Beziers has the third highest poverty rate of France's 100 largest municipalities.

In a town of some 70,000 residents, so-called "pieds noirs" (literally black feet), French nationals born in north Africa before the end of colonial rule, mingle with Arab immigrants who made the same journey in search of jobs during France's post-war industrial expansion, and another community of recent immigrants from all corners of the world.

In Pascal's view, the outgoing mayor, Raymond Couderc, "pissed on the town," by failing to address its economic decline.

"The only things opening are kebab stands. Beziers is a beautiful town, a historic place that was one of the crossroads of Europe, but the town centre is on its deathbed."

Regine, 71, adds: "We are in such a desperate state that Menard is the only person who can prevent us dying."

But Regine says she will still not bring herself to vote for his FN-backed list out of respect for the memory of her Jewish father.

Many in France still see the party as tainted by association with its founder, Jean-Marie Le Pen, a serial Holocaust denier whose political career began in unequivocally fascist circles.

Menard himself says only six of his 49 would-be local councillors are FN activists and insists that Marine Le Pen, the FN founder's daughter, does not tell him what to say. He represents, he says, "the voters who feel they have been abandoned."

An hour's drive away, Perpignan also looks set to throw out a long-established centre-right political dynasty, one that has been in power locally since 1959.

In a town with a large north African minority and a sizeable Roma community, Marine Le Pen's partner and party deputy, Louis Aliot, topped the first round with 34.2 percent of the vote.

"It seems like a new party has arrived with fresh ideas and we hope they will be put into operation," said local resident Bernard, 71.

"Everyone here is fed up to the eye-teeth with feeling threatened by crime, with the town being filthy and not knowing if your car is going to be where you left it when you come out of a restaurant at night," he said, admitting he would never have spoken of the FN in approving terms a decade ago.

Recognising the need to detoxify the party's image, Marine Le Pen has expelled overtly racist members and even fielded a handful of ethnic minority candidates.

"People here feel abandoned," said Aliot. "When we talk about insecurity we are accused of seeing evil everywhere but the people here live with it every day. And they want to see the back of a crony-based system in the town hall."

The Socialists must also contend with a widespread disgust at the mainstream parties, which is keeping many away from polling booths.

"Nobody should bother voting any more," said Christian Crastre, a company director who says his heart is with the left but can no longer stand "professional politicians".