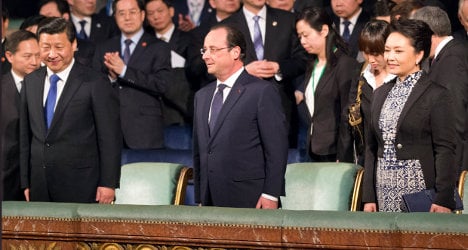 After a day devoted to multi-billion-dollar business deals, Chinese leader Xi Jinping trained his sights on culture and history during the last day of his lavish visit to France.

Yet business was still the talk of the day at an economic forum on the margins of the three-day state visit, as French Finance Minister Pierre Moscovici called for more Chinese investment in France in a bid to boost jobs and growth.

"Today, the lion has woken up, and it is peaceful, pleasant and civilised," Xi said in a final speech after a trip to the UNESCO headquarters, referring to Napoleon's description of China as a sleeping lion.

French authorities have bent over backwards to woo Xi, giving the Chinese president and his wife Peng Liyuan VIP treatment as the power couple visit France on the 50th anniversary of full diplomatic ties between the two countries.

"Your visit today marks, 50 years on, the beginning of a new cycle," in Franco-Chinese relations, said Hollande.

French companies are keen to get a bite of the huge Chinese market and Paris also wants investment from the fast-growing Middle Kingdom to flow in.
At the economic forum on Thursday, which took place after Xi and his French counterpart Francois Hollande oversaw the signing of 50 deals worth €18 billion  ($25 billion), some 500 businesses met as well as Chinese and French ministers.
Chinese Commerce Minister Gao Hucheng called on Paris "to further facilitate Chinese investors setting up (in France) on a legal level", referring to the mammoth red tape that businesses have to go through in France.
He said that in exchange, "China is ready to import more French products" to re-balance trade between the two countries, which is heavily tilted towards China.
'I was always interested in French culture'

But business was far from Xi's mind on Thursday as he visited the headquarters of the United Nations Educational, Scientific and Cultural Organisation in Paris and later made a speech at the foreign ministry rich in
historical and literary references.
"Many leaders of the old generation of the Chinese Communist Party studied in France," he said in his speech marking President Charles De Gaulle's momentous 1964 decision to break ranks with the United States and recognise communist China.
"This is why from a young age I was really interested in French culture, history, philosophy and art."
He went on to list French author after French author, drawing loud applause from those listening.
"By reading books written by La Fontaine, Balzac, Hugo, Maupassant, I gained a better understanding of human life," he said.
"Characters like Jean Valjean ("Les Miserables"), Quasimodo ("The Hunchback of Notre-Dame")… are solidly anchored in my memory."
The Chinese couple then travelled to the Versailles palace, built by Louis XIV, where they was treated to a concert and lavish dinner with Hollande and were joined by Prime Minister Jean-Marc Ayrault.

Hollande presented his Chinese guest with a bust of France's post-war president Charles de Gaulle, the first Western head of state to establish diplomatic ties with communist China in 1964.

The question of rights in China also came to the fore on Thursday with some 160 Tibetan exiles staging a rally in Paris, holding up banners such as "Hollande team up with world leaders to save Tibetan lives" and "Wake up United Nations."

Since 2009 about 120 Tibetans have set themselves on fire in China in protests against the authorities, denouncing what they say is an erosion of their religious freedoms and culture and discrimination by the country's Han
majority.
Already in the morning, activists from media watchdog Reporters Without Borders unfurled a huge portrait of Xi making an obscene gesture, in a photomontage that carried the slogan: "Without freedom of information, no
force of opposition."
The Chinese leader is on his first-ever European tour and after visiting The Netherlands and France will head to Germany and Belgium.