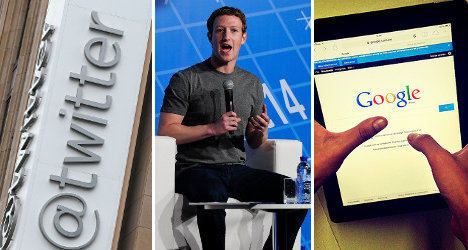 Once again France seems lined up for a legal battle with US internet giants.

The group argues the terms and conditions on the social media giants’ services are nearly illegible and that many French people cannot read the conditions because they are written in English. It wants Facebook and Twitter to right these wrongs.

Here UFC-Que Choisir’s in-house lawyer Amal Taleb tells The Local why the lawsuit is necessary and why the "one-size-fits-all" approach adopted by these American companies does not work in France.

Why is UFC-Que Choisir suing these American internet giants?

At present they are composed, for the most part, of clauses that appear to us illegal or improper under French law. We sent a letter to the networks in June with our objections and then we discussed it with them over the next several months.

Google and Facebook made some changes in November and December, but they were minor modifications. They were definitely not done in such a way that would improve the rights of consumers.

What problems with these sites have you targeted specifically?

The terms and conditions are simply unreadable for consumers. You have several hyperlinks that lead to a text, but then when you start to read there are 30, 40, 50 hyperlinks in the body of the document. After a certain amount of time it becomes completely impossible to know what you are signing up for.

Some of the links send you to documents that are a bit technical or even pages written in English, which doesn’t comply with French law. So you cannot knowingly consent to their terms and conditions, because they are done in such a way that French people can’t understand them.

Are they intentionally trying to prevent people from understanding the terms?

I don’t know and I won’t guess. I can say only that in many other businesses, just as complex as this one, the terms and conditions are all in one document. But in these cases there are three, and with hyperlinks. In reality, their intentions don’t matter, what counts is the result. And in this case it is unreadable.

What chances do you have of winning your case?

We have won against French and foreign companies, for example against airlines. In those cases it was to protect consumers by analyzing the companies’ terms and conditions. It’s a specificity of French law that allows consumer organizations to take action to obtain changes to a contract.

Privacy issues with social networks keep coming up in France. What’s the problem?

The problem is their one-size-fits-all approach. They have written their documents according to American or Californian laws and then they believe they can use these texts for the rest of the world. One-size-fits-all does not fit anyone.

In the American system, if I’m not wrong, as long as you have communicated information to someone you have accepted that this information is absolutely public. We tend to think in France that some information is private even after it has been shared.

For example, in the Data Protection Act of 1978 there is an article that prohibits anyone collecting information about your gender, your ethnicity, your religious and political beliefs. In America as long as you have put that information online it would be considered public.

Surely people in France are now aware their online data is essentially public?

I think people are not aware for a simple reason. When you have your account on Facebook or Twitter you are told that you can change the settings, which leads you to presume that you can limit the spreading of your data. But there are clauses, which appear completely unreadable to consumers, which result in their data being shared anyway.

It’s paradoxical to say you can limit the sharing of data, but at the same time you have terms and conditions that allow the sharing of your data without you knowing it.