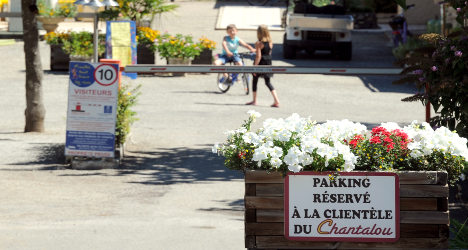 A man got 13 years in prison for a series of rapes at French holiday campgrounds. Photo: Philippe Desmazes/AFP

A French court sentenced a man to 13 years in jail on Friday for a string of sexual assaults on girls aged 6 to 17 at campsites in the Ardeche region of central France.

Sebastien Dutheil, a 33-year-old tiler, was on trial over two counts of rape and nine of attempted or actual sexual assaults on the victims, who included three foreigners — a Belgian, a Dutch girl and a German.

The court said Dutheil, described as a sexual predator by prosecutors who had asked for a 15-year sentence, would have to serve a minimum of two-thirds of the sentence before being considered for parole.

It also ordered the defendant to undergo 10 years of medical follow-up observation after his release, saying he would have to do five more years in jail if he failed to comply.

Dutheil staged the attacks between June and August 2012, sneaking into tents under cover of darkness and wearing a mask, and restraining the girls while he assaulted them.

The victims' parents were often sleeping in nearby tents or caravans.

He was arrested after police matched DNA they found on the underwear of a young victim with his, which they had on file because of a previous conviction for sexual assault.

Dutheil then admitted to a series of attacks which brought terror to an area popular with nature lovers at the height of the holiday season, and confessed to similar assaults he claimed to have carried out in 2010 and 2011.