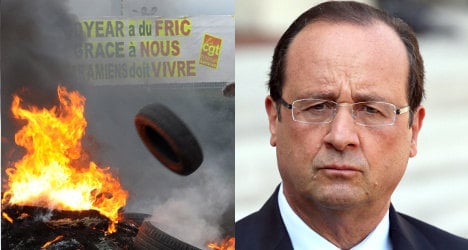 Yet another one of Hollande's reforms has been deemed unconstitutional. Photo:AFP

France’s Constitutional Council ruled on Thursday that a reform that would have allowed the government to fine companies that shut down profitable factories was unconstitutional.

The reform was deemed by the council – France's highest constitutional authority – to be a violation of “a freedom of undertaking and private property rights.”

The plan to fine companies which close factories without having explored alternatives was part of a landmark Hollande reform aimed at appeasing industry workers, thousands of whom have lost jobs in recent years.

But the decision to strike down the key clause in a law promised by candidate Hollande in 2012, serves as yet another embarrassing blow for the president and means he holds an unenviable record.

The council's ruling is the 13th law to be invalidated since he took office, putting him ahead of former presidents Nicolas Sarkozy and François Mitterand, who both had 12 during their first two years as president, Europe 1 radio reported. Perhaps the biggest and most embarrassing setback for Hollande was when the Constitutional Council threw out his flagship 75 percent tax law, which was subsequently resuscitated in a different form

The latest to bite the dust was the so-called "Florange law", named after a steelworks in northern France where candidate Hollande told workers facing layoffs that he would pass legislation to protect their rights in case of a shutdown.

The law, which was only approved at the end of February, came too late to stop steel giant Arcelor Mittal from shutting two blast furnaces in Florange in northern France last year.

Another clause of the law, which did make it past the council, makes it compulsory for any company that employs more than 1,000 workers to look for a buyer for a site they want to close in three months' time. However the planned penalty for failing to do so, a fine the equivalent of 20 times the minimum wage for each worker affected, didn’t survive the constitutional review.

Under the law approved by the ruling Socialists along with their Green coalition partners, workers can also make an acquisition offer. The centre-right UMP party of former president Nicolas Sarkozy, which is seen as more pro-business, voted against the bill.

The decision on the law comes as Hollande's popularity rate, which stands in the teens, is the lowest of any modern French president and his Socialist party is expected to lose many local seats in Sunday's local elections.