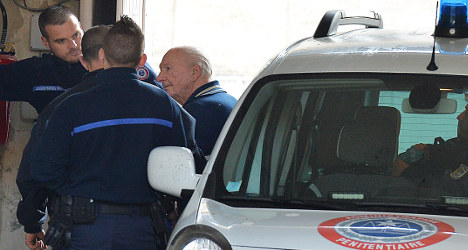 A 93-year-old French 'pappy' is trial for the murder of a woman who rejected his advances. Photo: Herve Oudin/AFP

Marcel Guillot may look like your typical French "papy" (granddad), but French prosecutors say he is anything but.

They accuse the 93-year-old pensioner of breaking into the home of an 82-year-old woman, who had turned down his advances, before stabbing her to death in a fit of rage.

As Guillot’s murder trial opened on Wednesday in a court northeast of Paris, prosecutors told how the retired handyman jumped into his aging Renault car and made the 135 kilometre drive from his home in the Paris suburb of Bobigny to the tiny village of Saint Gilles, in the Marne department of north eastern France, late one night in December 2011, French daily Le Monde reported.

His destination was the home of Nicole El Dib, an 82-year-old friend, whose husband was in hospital fighting for his life. Guillot had developed a crush on Nicole since the death of his wife. The 93-year-old may seem frail at first sight and his hearing is so bad he could barely catch the judge's words on Wednesday, but prosecutors say he had the strength to pry open a shutter at Nicole El Dib's spacious country estate.

Awoken by the racket, Nicole then came face-to-face with Guillot, before he stabbed and beat her to death. The attack was so violent it left blood stains on the elderly woman’s bedroom walls and all the way to the hallway landing.

Her body was later discovered in a pool of blood near a small creek that runs through her estate. It was only five months later, as Guillot was setting up his camper van on Oleran Island on the French Atlantic coast, as he had for the previous five decades, that police clicked handcuffs onto his wrists.

Investigators had found a watch at the crime scene and pulled DNA off it that matched Guillot. When confronted with the details of the crime he allegedly said she made him feel like a fool and he wanted to "teach her a lesson."

The Guillots and the El Dibs had been friends for years, but over time Marcel Guillot began to feel something more for Nicole El Dib, the court heard. It came to a head when she asked Guillot to stay with for a few weeks while her husband was hospitalized with Parkinson’s Disease and her caretakers were away.

By Guillot's account it was idyllic. He buttered her toast, changed the bed sheets and even fed the chickens in the back yard. In the afternoons the pair played Scrabble together.

But something went wrong at Nicole's home. Guillot ended up leaving angrily in November 2011, with the feeling he’d been "rejected like a nitwit." Though Guillot admitted in court on Wednesday his crush, he didn’t detail exactly what happened between the two of them on that day.

He stewed in anger for the next month and then made his late-night drive back to Nicole's estate. In court on Wednesday Guillot acknowledged the trip, but denied the killing.

“I just went down the stairs while pulling her,” he said, according to Le Parisien. “I’m telling you the truth!”

And when she somehow ended up dead during his visit Guillot said he had one intention: “I wanted to bring her back to Bobigny to bury her. I would have put my wife’s ashes right next to her. The two girlfriends together, you know. But I couldn’t lift her.”

If convicted he faces life in prison without the possibility of parole.