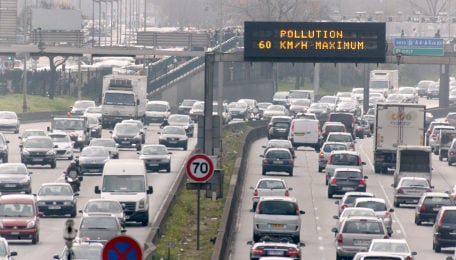 Air pollution levels in Paris are on the rise again. Photo: Francois Guillot/AFP

Airparif, the agency that monitors the air quality around the French capital issued warnings on Thursday over a rise in the number of polluting particles in the air.

Although the level of pollution is not expected to equal the spike seen earlier this month, that forced the Town Hall to make all public transport free, it is high enough to pose a risk to more vulnerable members of the population.

Sick children or those with asthma and patients suffering from cardiac or respiratory illnesses are advised to avoid any strenuous exercise.  Authorities in Paris have once again taken measures to try to bring about a reduction in pollution levels by encouraging Parisians to take public transport. Speed restrictions have been implemented on certain roads including the Peripherique ring road.

The dangerous spike in pollution levels earlier this month left some comparing the air in Paris to that of Beijing. Ironically Thursday's rise in pollution comes as the Chinese president Xi Jinping was visiting Paris, which lead to authorities closing 13 Metro stations in the capital for security reasons.

Residential parking has also been made free to encourage motorists to leave their cars at home on Thursday.

The Town Hall said that if pollution levels continue to rise, other measures will be introduced such as making the city’s car and bike sharing schemes free.

The pollution in and around Paris is generally caused by the fine particles that are emitted by vehicles as well as by chimneys of houses and factories.

Airparif issues public advice once the level of pollution passes 50 micrograms per metre cubed of air in 24 hours. The official alert level is triggered at 80 micrograms per cubic metre of air.

At the height of the pollution spike earlier this month levels of particles in the air were at 180 micrograms per cubic metre.