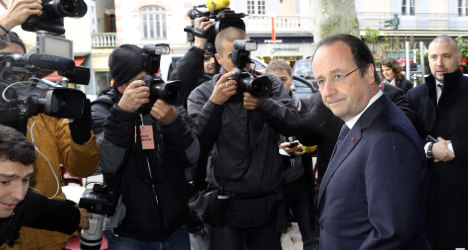 Hollande tells his Socialist Party to learn lessons from the poor showing in first round of the local elections. Photo: Nicolas Tucat/AFP

Last Sunday's first round of local elections saw Hollande's Socialists and their allies take only 38 percent of the vote, nine points behind centre-right parties.

Speculation is rife that – barring a major turn-around in this Sunday's second round – the result will trigger a wide-ranging cabinet reshuffle.

"Even if the vote is not over, the president stressed (to ministers) that… the French people must be heard," spokeswoman Najat Vallaud-Belkacem said.

"The government must learn a lesson from this municipal election – that it must work more quickly for the country's recovery, with more strength, more consistency and more social justice," she quoted Hollande as telling the cabinet.

The poll also saw a better-than-expected result for the far-right National Front, with the anti-immigration party on track to take control of up to 15 towns.

Hollande and his government have fallen to record low approval ratings as they struggle to tackle economic stagnation and widespread unemployment.