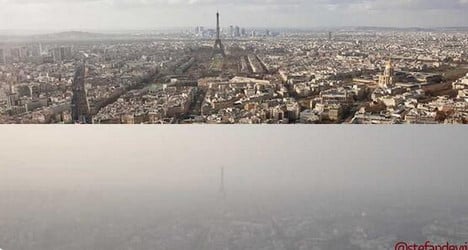 French prosecutors have opened a preliminary probe after an environmental group filed a criminal complaint over this month's spike in air pollution, a judicial source said Monday.

The complaint for "endangering others" was filed by green group Ecologie Sans Frontiere amid intense pollution this month that saw particulates in the air exceed safe levels for five straight days in Paris.

Overall, more than 30 departments in France were hit by maximum level pollution alerts, prompting Ecology Minister Philippe Martin to say air quality was "an emergency and a priority for the government".

Paris was enveloped in a murky haze, cars with even number plates were banned from city streets and public transport was provided for free as officials sought to improve air quality.

Ecologie Sans Frontiere said it was the first time such a criminal complaint had been filed.

The complaint does not specify who could be held responsible for the pollution, but the group's vice-president, Nadir Saifi, said investigators could eventually target car manufacturers or certain government offices.

“We are sick of this air pollution,” Saifi, spokesman of Ecology with Borders told France Info after lodging the complaint. "As soon as the weather is good, and as soon as it's dry in winter you have these peaks in pollution and the emergency wards at hospitals fill up. Slogans and small demonstrations are no longer enough.”

According to the Airparif, the national air quality

and pollution agency, levels of particles are so high that even a brief exposure poses a risk to the health of certain vulnerable members of the population.

Such particles are too tiny to be filtered in the mouth and nostrils, and so embed themselves in the lungs more easily

, and can have significant negative health effects.

Pollution levels tend to rise in winter because of the increase in fuel, notably wood.