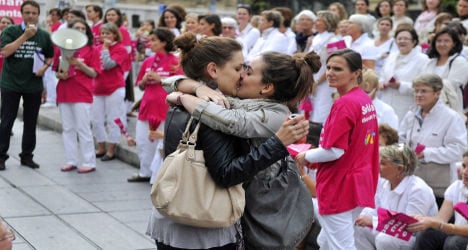 Two young lesbians (not the ones pictured here) were sprayed with water by a public bus driver after they kissed. Photo: Gerard Julien/AFP

Transport authorities in northern France laid off a driver ‘as a protective measure,’ after he sprayed a teenage lesbian couple with water after they kissed in front of him last week.

The driver stopped in front of a high school near Nancy to pick up students around 5:30pm on Friday when the young couple shared the kiss. The driver allegedly uncapped a bottle of water he had with him and let its contents fly on the teenage girls.

One of the teens rode the bus to her destination, all the while drenched from the water, and then confronted the driver, French daily Le Parisien reported. He reportedly told her he was “against homosexuality,” and then told her to get off the bus.

The girl reported the incident and the driver was fired after admitting to his bosses that he had sprayed the teens. The local transport service, which goes by the acronym STAN, immediately apologized for the attack.

The agency tweeted: "The act cannot be tolerated and that's why the driver involved was immediately laid off as a protective measure."

The girl, who said she plans to file a formal complaint against the driver, isn't the first to face anti-gay violence in France, which has flared at times after the divisive debate over the legalization of gay marriage in 2013. The Local reported in April last year a shocking incident when a gay man who was brutally beaten in Paris by homophobic thugs while walking with his boyfriend. The unprovoked beating came as France's at times violent controversy over legalizing gay marriage was coming to an end. President François Hollande presided over the approval of a new law last spring that began allowing same-sex unions.