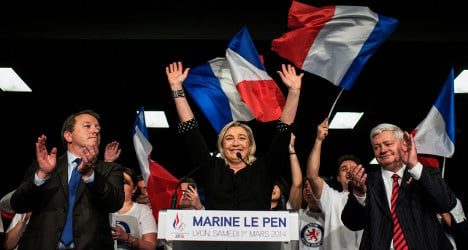 In the first round of municipal voting on Sunday the right made big gains. Photo: AFP

France's far-right National Front party dealt a major blow to the ruling Socialists Sunday after several of its candidates took prime position in the first round of local elections.

The main opposition UMP party also hailed a "big victory" as preliminary estimates showed it came out trumps in the elections, amid severe disillusion with President Francois Hollande's government against a backdrop of near-zero growth, record unemployment and historic lows in presidential approval ratings.

According to a BVA poll, left-wing parties took 43 percent of the vote while the right took 48 percent, and the FN seven percent — far higher than its 0.9 percent result in the first round of 2008 municipal polls.

In the northern France town of Hénin-Beaumont the National Front had pulled in over 50 percent of the vote, while in Bézier the ballot count stood at 44 percent, over 30 percent of voters in Perpignan and Avignon gave their support to the anti-immigration, anti-EU party.

France also saw its highest rate of voter abstention since at least 1971, with 38.5 percent of voters avoiding the polls on Sunday.

Applauding what she said was "an exceptional vintage for the FN", party head Marine Le Pen said, adding the polls marked the "end of the bipolarisation of the political scene".

According to initial estimates, FN candidates got a majority of votes in several key towns and cities that will put them in pole position in the second round planned for March 30.

In the former coal-mining town of Henin-Beaumont in northern France, Steeve Briois went a step further and achieved 50.3 percent, an absolute majority which made him the outright winner and mayor.

Under municipal election rules in France, any candidate who gets more than 50 percent is declared the winner and there is no need for a second round.

The Socialist government immediately responded to the surge of the FN.

"The position of the Socialist Party is very clear: we will do everything we can to stop an FN candidate from winning a municipality," party spokeswoman Najat Vallaud-Belkacem said on France 2 television.

The leader of the UMP party meanwhile called on those who had voted for the FN to "carry over their vote" onto UMP candidates in the second round.

Jean-Francois Cope predicted a "big victory" for his party in the second round, in a sign that corruption scandals that have affected the UMP as well as former president Nicolas Sarkozy had little impact.

In the French capital, meanwhile, all eyes were on Anne Hidalgo, the daughter of Spanish immigrants, and former Sarkozy minister Nathalie Kosciusko-Morizet — both engaged in a fierce battle that will see Paris get its first ever female mayor.

Just under a million people (nearly one in 60 of the population) stood as candidates in an election that will eventually produce over 36,000 new mayors for municipalities ranging from the tiniest of agricultural hamlets to big cities like Lyon, Marseille and Paris.

And despite a series of much-publicised selfies posted on Twitter by people who voted, voter turnout was expected to be dismally low after four different
polls suggested general abstention would reach at least 35 percent — a record for French municipal elections.

This did not appear to affect the FN, which hopes to claim the mayorship of 10 to 15 mid-sized towns after the second round.

That would represent a remarkable turnaround for a party that, at the time of the last municipals, was mired in financial crisis and internal bickering, and looked in danger of falling to the margins of French politics.

Le Pen took over the FN leadership in 2011 and set about broadening the appeal of a party regarded as taboo by many voters in light of her father's repeated convictions for Holocaust denial and inciting racial hatred.

As well as trying to "detoxify" the FN's image, she has attempted to make it less of a single-issue party by campaigning on unemployment, costs of living, crime and promising change. And as France struggles with near-zero economic growth, her efforts appear to be paying off.

In Henin-Beaumont, population 26,000, some of those who voted for the FN said they wanted change.

"We don't expect much any more from politicians… Briois, we don't know, he has never held power. Shouldn't we give him a chance?" asked Gilles, a
67-year-old voter.

Past FN attempts at running local councils have often failed as a result of the eccentric personalities involved, but Le Pen has been eager to show that
the party is capable of prudent governance.

The FN's power has steadily grown. Its proposals on immigration — curbing rights to family reunion and seeking a review of freedom of movement rules within the 28-nation European Union — have been endorsed by key figures in Sarkozy's UMP.

And its opposition to any further transfer of powers to European institutions is shared across the EU, not only by radical, populist parties growing strongly in several countries, but also by much of the mainstream.