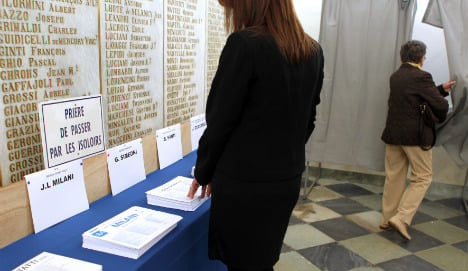 President Francois Hollande was one of several key political figures who by midday had already voted in the first nationwide polls since his 2012 election, visibly relaxed despite concern that a drop in turnout by disillusioned Socialist party loyalists will boost the far-right National Front (FN).

Polls have suggested around one in four voters are considering casting their votes for Marine Le Pen's FN, setting the scene for what could be a significant election for the anti-immigration, anti-EU party led by the daughter of its founder Jean-Marie Le Pen.

The vote is also set to be a groundbreaking one for women in the French capital: whatever the final outcome of the two rounds of voting on consecutive Sundays, it is certain that Paris will end up with its first female mayor.

There has been much agonising in the build-up to the vote that the overall turnout may fall below 60 percent due to widespread disenchantment with mainstream parties — although that would still be considered a triumph for local elections in most industrialized countries.
Just under a million people (nearly one in 60 of the population) will stand as candidates in an election that will produce over 36,000 new mayors for municipalities ranging from the tiniest of agricultural hamlets to metropolises like Lyon, Marseille and Paris.
Marine Le Pen believes her party could claim the mayorship of 10 to 15 mid-sized towns.
That would represent a remarkable turnaround for a party that, at the time of the last municipals in 2008, was mired in financial crisis and internal bickering, and looked destined for the margins of French politics.
Marine Le Pen took over the leadership in 2011 and set about broadening the appeal of a party regarded as taboo by many voters in light of her father's repeated convictions for Holocaust denial and inciting racial hatred.
She secured just under 18 percent of the national vote in the first round of the presidential elections two years ago and polls indicate she is more popular now.
On Sunday, she cast her vote in the northern town of Henin-Beaumont, where FN candidate Steeve Briois could take the mayorship from the left-leaning incumbent.
"The voters will decide. I trust them," she said, smiling to the cameras.
As well as trying to "detoxify" the FN's image, Le Pen junior has attempted to make it less of a single-issue party by campaigning on unemployment, living costs and crime.
Under the two-round, run-off system for the elections, any party which secures 10 percent backing in the first round has the right to present candidates in the second round on March 30th.
A strong showing by the FN could see former president Nicolas Sarkozy's centre-right UMP eliminated at the first hurdle in some contests, or see the overall right-wing vote divided in three-way run-offs, thereby boosting the Socialists.
Past FN attempts at running local councils have often failed as a result of the eccentric personalities involved.
Marine Le Pen wants to show that the party is capable of prudent local governance. Success could improve the party's image and potentially make an alliance with the FN palatable to the centre-right.
The FN's negotiating power has steadily grown. Its proposals on immigration — curbing rights to family reunion, denying state benefits to new migrants and seeking a review of freedom of movement rules within the EU — have been endorsed by key figures in Sarkozy's UMP.
And its opposition to any further transfer of powers to European institutions is shared across the EU, not only by the radical, populist parties growing strongly in several countries, but also by much of the mainstream.
In Paris, meanwhile, the Socialist candidate Anne Hidalgo, the daughter of Spanish immigrants, is the favourite to succeed her current boss Bertrand Delanoe as mayor.
But she looks sets to be run extremely close by former Sarkozy minister Nathalie Kosciusko-Morizet, with last-minute polls indicating a neck-and-neck battle.
Polling stations opened across France at 8 a.m. (0700 GMT) for 44.8 million eligible voters, including 280,000 from the European Union. Voting began earlier in French overseas territories like New Caledonia in the South Pacific and the Indian Ocean island of Réunion.