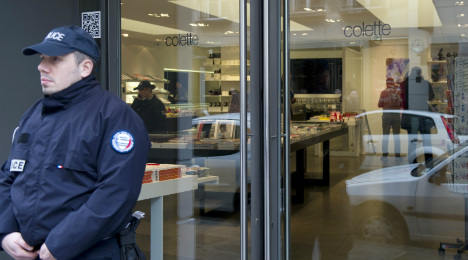 The pair held up the store on Saint-Honoré street, near the Place de Vendôme, shortly after it opened at 10am and briefly detained the seven people who were inside as they scooped up merchandise, mostly expensive watches, before fleeing on a scooter.

No-one was hurt in the break-in, police sources said.

The area around Place de Vendome is home to many upscale stores and has been the scene of several break-ins in recent months despite the justice ministry being close by, with two jewellery boutiques robbed in March alone.

In similar heists, in December armed thieves made off with luxury watches worth €800,000 from a boutique in the same neighbourhood, shortly after a separate robbery of hundreds of thousands of euros worth of luxury watches by axe- and sledgehammer-wielding robbers at a Vacheron Constantin store.