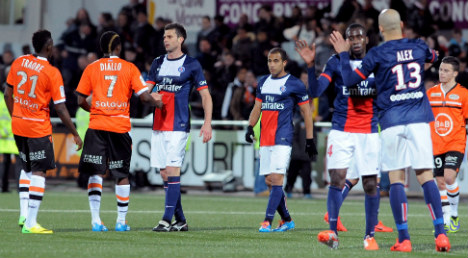 Thiago Motta's first half goal was all that split the two teams with the valiant mid-table hosts giving Laurent Blanc's side plenty of nervy moments in Brittany.

The hard fought win on Lorient's artificial pitch at their Stade du Moustoir extended PSG's crushing lead at the top of Ligue 1 to 11 points, with second-placed Monaco in action on Sunday against third-placed Lille.

"We can't always win 3,4 or 5-0. We must congratulate the players even if it was not an extraordinary performance," said Blanc, who insisted that his team had not been distracted by their impending clash with Chelsea.

"All reporters believe that we have talked of nothing but Chelsea, that it's difficult to think of Lorient. But tonight we were at the Moustoir, not at Stamford Bridge."

For PSG, who prevailed despite not being at the top of their game, this success was their sixth in a row in Ligue 1 and their eighth on the trot in all competitions.

The one sore point for Blanc was the injury suffered by captain Thiago Silva, who had to come off early on in the first half.

Blanc elected to field Brazilian Marquinhos in place of his compatriot Alex in central defence, with Marco Verratti regaining his place in midfield from Yohan Cabaye after a two-game absence.

Christophe Jallet came in for the injured right back Gregory Van der Wiel against his former club.

On the right Blanc preferred Ezequiel Lavezzi to Lucas.

Lorient kept the champions-in-waiting at bay until the 41st minute, when in a move inspired by Zlatan Ibrahimovic, Motta broke the deadlock.

Ibrahimovic conjured up an exquisite back-heeled flick of the ball to Edinson Cavani down the left, with the Uruguayan returning the favour for the Swede to attempt a close range angled shot.

The star striker's attempt was denied by Lorient keeper Fabien Audard but Motta was on hand to pounce on the loose ball, the Brazilian-born Italian only having to nudge it over Audard's goal line.

Ibrahimovic by this point was wearing the captain's armband having inherited it from Silva, who was forced to come off in the 24th minute after receiving an accidental knock in the face from Vincent Aboubakar's elbow in an airborne duel.

Alex came on in his fellow Brazilian's place.

PSG enjoyed almost three quarters of the possession in the first half and would have been relieved to have reaped the one goal reward.

Lorient emerged for the restart with fire in their bellies, and Jerome Aliadière should have done better when blazing his effort high over the PSG cross bar.

On the hour, Verratti ceded his place to Cabaye, as Lorient's Aliadière paid for his lack of precision shooting, making way for Sadio Diallo.

Only Audard's reflex action and a large slice of luck kept out Jallet's tight-angled shot on the right from doubling PSG's lead with quarter of an hour remaining.

PSG held on despite a couple of late scares, notably when midfielder Bryan Pele had the ball in the back of the PSG net only for his effort to be deemed offside.