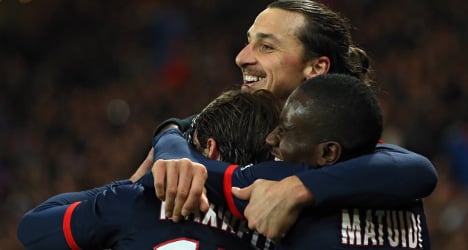 Zlatan Ibrahimovic and co will line up against Chelsea in the quarter finals of the Champions League. Photo: AFP

Laurent Blanc's PSG side face a tough task against Chelsea in the quarter finals of the Champions League.

The French club, bidding to win the competition for the first time were paired with the Premier League leaders in Friday's draw.

Both team's will probably be happy with the draw after avoiding favourites Bayern Munich and the Spanish giants Barcelona and Real Madrid.

The tie sets up a mouth-watering clash between PSG's star striker Zlatan Ibrahimovic and England stalwart John Terry, who will also have the job of stopping PSG's other stellar forward Edinson Cavani.

Jose Mourinho's team will be favourite's on paper to get through to the semi final's as the Portuguese bids to win the competition with three different clubs, after winning the Champions League with Porto and Inter Milan.

Laurent Blanc, however will be quietly confident that with Ibrahimovic, Cavani and Brazilian Lucas, he has the weapons to pose Chelseea a few problems or two.

The first leg will take place at the Parc des Prines in Paris on 1/2nd of April with the return leg a week later on April 8/9th.

Such is their desire to win their first Champions League trophy, PSG's owners, QSI (Qatar Sports Investments' are offering an eye-watering €1-million bonus to each player if they manage to triumph in the final in Lisbon on May 24th.

That would represent the biggest bonuses ever paid out in the history of football, French newspaper L'Equipe claimed this week.

The previous highest bonuses handed out were in the region of €800,000 (£667,000, $1.1m) that Bayern Munich players pocketed for their Champions League triumph last season as well as winning the German title and German Cup.

With a squad of 25 players for the Champions League, the club's president Nasser al Khelaifi could be looking at a total payout of around €25 million, although it is not clear whether only first team regulars would qualify for the €1 million jackpot.

Ibrahimovic is clearly not short of cash after he was listed in the world’s top five richest players this week.

To put that in perspective the windfall up for grabs for PSG’s players, including Uruguayan Edinson Cavani and Brazil’s Thiago Silva, is double that on the table for the players of Spanish giant’s Real Madrid.

PSG’s players are however no strangers to receiving big bonuses.

Last year the team, which then included England’s David Beckham were handed €240,000 for getting to the quarter finals of the Champions League, where they were knocked out by Barcelona.

They also pocketed €400,000 each for winning the league, which PSG look likely to do again this year after building up an eight-point lead over fellow mega-rich club Monaco.

One thing that would no doubt thrust the club into the big time is winning the Champions League.

But they will have to get past Chelsea first.

What do you think? Can they do it?