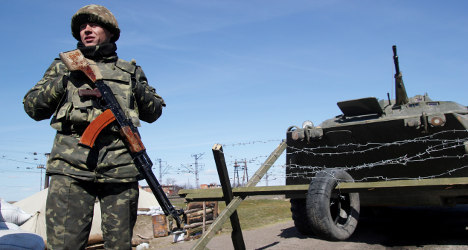 France has halted most of its military ties with Russia due to the take over of Crimea. Photo: Sergiy Gumenyuk/AFP

France has suspended most of its military cooperation with Russia, the French defence minister said on Friday, as Paris was still mulling whether to nix the sale of two Mistral warships to Moscow.

Paris has suspended "the majority of its military cooperation with Russia" in the wake of Moscow's takeover of Crimea, Defence Minister Jean-Yves Le Drian said in Estonia's capital Tallinn.

"Contacts between the chiefs of staff of France and Russia have been annulled," a source close to the minister told AFP.

A joint military exercise between the EU, Britain, France and Russia planned for April has also been cancelled, the sources said.

France will offer to send four fighter jets to the Baltic states and Poland to boost NATO air patrols over the region should the alliance request them,the source revealed.

But so far Paris has resisted pressure to suspend the controversial €1.2 billion Mistral deal with Moscow. A final decision on the sale is expected in October, according to Le Drian, who will visit fellow NATO members Lithuania and Poland later in Friday.

Besides the Rafale and Mirage 2000 aircraft, Paris will also offer to ensure "AWACS patrols from France around twice a week" if asked by NATO, the source close to the minister said Friday.

The AWACS aircraft — Airborne Warning and Control System — are among the most sophisticated planes in the NATO armoury, capable of monitoring huge swathes of airspace.

Le Drian's Friday visit is a bid to reassure "Balts and Poles, Russia's neighbours, given the Ukraine crisis," the source said, adding that the NATO military alliance has assured patrols over the Baltics since 2004.

The United States is responsible for the patrols until May. Given the tense situation in Ukraine, it sent additional F-15 fighter jets to the region earlier this month, bringing their total to 10 aircraft.

Poland will then take over the patrols from the US. The ministry source said France will offer the fighter jets, along with the AWACS early warning aircraft, if NATO and Poland deem them necessary.

NATO has already deployed AWACS reconnaissance aircraft to overfly Poland and Romania as part of its efforts to monitor the Ukraine crisis.