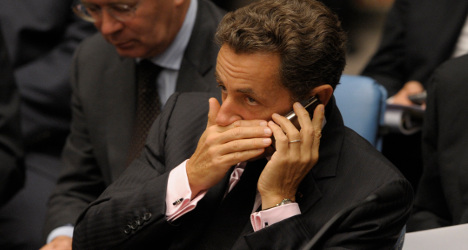 Siphoning off public money, tax fraud and even vote-buying: a whiff of corruption hangs around more than a few candidates in the nationwide municipal elections France will hold over the next two weekends.

Yet thanks to the indulgence of the main political parties and what appears to be an ambivalent attitude towards suspected graft amongst many voters, there is a good chance that some of the most scandal-tainted local politicians will be able to hang on to the power and privileges that go with being a French mayor.

The elections come at a time when the main opposition centre-right UMP party of former president Nicolas Sarkozy is reeling under a string of corruption and other scandals that have embroiled him.

They range from allegations that Sarkozy took money from former Libyan dictator Moamer Kadhafi to fund his successful 2007 election campaign, that he received illegal funding from L'Oreal heiress Liliane Bettencourt, the country's richest woman, and that he rigged a payout to a disgraced tycoon who had supported him.

But both President Francois Hollande's Socialist party and the UMP are fielding candidates tainted by allegations of wrongdoing and fiscal
impropriety.

Transparency International said while France was not Europe's most corrupt country, the number of "special cases" in the upcoming elections have helped to foster public disenchantment with the whole political system.

Thirty-five percent of voters shunned the last municipal elections in 2008 and the figure could be higher still this time round, the anti-corruption NGO warned.

In a bid to raise standards in French public life, parliament in January approved a law which will ban politicians from holding two or more offices at the same time from 2017.

The practice was blamed for encouraging cronyism and for allowing lawmakers to establish personal fiefdoms which helped them sustain careers at national levels while blocking the entry of newcomers to local politics.

Anti-graft lobby group Anticor has been battling to introduce more transparency and probity in public life and has asked candidates to sign a charter of ethics pledging clean governance.

But only about 350 mayoral candidates have inked it so far. There are 36,674 mayoral seats up for grabs across France.

"The question of ethics has become a central issue in the political debate," said AntiCor's co-founder Severine Tessier.

Tessier said voters appeared to be tolerant of even wayward officials "in the hope of obtaining favours to resolve a personal problem or getting a place in the creche."

Investigators suspect Dassault of operating an extensive system of vote buying that influenced the outcome of three elections in 2008, 2009 and 2010, which were won either by Dassault or by his successor and close associate Jean-Pierre Bechter.

The result of the 2008 vote, won by Dassault, was invalidated after the body which oversees public administration discovered a series of payments which could have influenced the outcome of the election.

Bechter has already been charged in the case but according to a recent survey, he is likely to retain his post in the town of Corbeil-Essones.

Patrick Balkany, who is close to Sarkozy, is also likely to be re-elected in the western Paris suburb of Levallois for a fifth term as mayor despite being investigated for tax fraud and for using public funds to pay an official who he used as his personal chauffeur.

The Socialists meanwhile could lose a bastion: the northern mining town of Henin-Beaumont which could now fall into the hands of the far-right National Front. The town's former Socialist mayor Gerard Dalongeville was last year sentenced to four years in prison on charges of accepting bribes and embezzlement.

But an independent left-wing mayor of the town of Propriano in Corsica has gone a step further than the others.

He has been declared ineligible to stand as he is currently being probed over thousands of euros of unaccounted funds discovered in his campaign
account for the last election.

As a result, he has put forward his wife as a kind of proxy candidate with the publicly declared idea that she will resign and trigger a by-election as soon as he is eligible to take office once more. All the indications are that she will be elected.