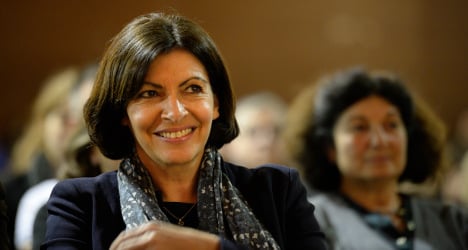 Anne Hidalgo tells The Local what she plans to do about dirty air and safety in the City of Light. Photo: Martin Bureau/AFP

Things are looking good for Hidalgo with the latest predictions from France's polling agency IFOP giving her 53 percent of the vote in the first round of the municipal elections, which will take place on Sunday.

But whether it's Hidalgo, the current deputy mayor, or her rival from the conservative UMP party, Nathalie Kosciusko-Morizet, who comes out on top, history will be made as Paris will have its first woman mayor. That fact has at times been lost amid an intense and close race.

Hidalgo has been seen as a status quo, whereas leftist Parisian leader and Kosciusko-Morizet, usually referred to by her initials 'NKM,' has been tagged as an energetic, ambitious, career politician.

Here Hidalgo answers The Local's questions on a raft of issues that concern expats living in the capital like housing, air quality, safety, night life and the legendary rudeness of Parisians.

It is extremely difficult for foreigners to find an apartment to rent in Paris. What will you do to make it easier and more affordable?

I believe that in the world-class city that is Paris, the presence of foreigners is a gift. We must therefore facilitate their moving in and ensure they are integrated in local public life.

Accordingly, the issue of housing is a top priority for me. I want to achieve the goal of an additional 10,000 dwellings each year in Paris. And because many foreigners in Paris are students, I am committed to creating 1,000 new student homes per year.

Air quality is a problem in Paris. What will you do to improve it?

Since 2001, we have implemented innovative measures to encourage Parisians to take modes of transport other than the car: Vélib ', Autolib', extension of Metro line 14 , splitting line 13. Thanks to this strong commitment, car traffic has decreased by 25 percent in Paris. I will continue to support electric vehicles. I would also like to develop an electric Scootlib ' service and provide free charging stations for electric vehicles at night.

Paris is known for being dirty. What is the first thing you will do to improve the cleanliness of the streets?

I intend to improve the cleanliness of our streets. It starts with awareness and mobilizing residents and tourists but also by increasing the number of cleaning staff. We will also increase to 200 the number of public toilets in Paris and, for cigarette butts, all trash cans will be equipped with cigarette snuffers.

I intend to fight against graffiti by developing protected areas dedicated to street art. I also will strengthen efforts against anti-social behaviour and want to involve neighbourhood councils in waste management and recycling. I want to develop large-scale recycling by establishing an effective and intelligent collection route and the restoration and recycling of everyday objects.”

Tourists in Paris are often the victims of crime. What are you going to do to make it safer?

Safety is a right and we have done extensive work to reinforce it since 2001. But the work is not done. I will create, in conjunction with police headquarters, teams that will protect areas with lots of people, particularly tourist spots. Train stations will also be redesigned and better integrated into their environment so that visitors feel more at ease. Finally, I believe that anti-social behaviour must not be tolerated. We will address it systematically with a focus on remedies and community service, such as "you break it, you fix it".

Do you think the nightlife in Paris is good enough for young people? Will you make it easier for bars to stay open later at night?

I will appoint a deputy to be specifically in charge of nightlife. He or she will be the contact point for residents, employees and night-time contractors. So nightlife can be fully experienced by those interested, I would like to automate certain Metro lines in order to prolong the hours, especially on weekends. The riverside roadways (les voies sur berge) could also be better used at night, without bothering locals.

My responsibility as mayor, if I am elected, would be to find the right balance between those who want to party and residents who yearn for tranquility. For the latter, the noise can be a real nuisance. I propose an "Anti-noise Plan" to minimize the disruption to neighbours.

The fight against noise pollution will add a new dimension to the Local Development Plan. Streets will be classified according to their noise level, and this data will be shared with Parisians. We will also create a team to prevent excessive night time disruptions, and I will require landlords to take into account soundproofing objectives.

Would you allow shops to stay open later at night and on Sundays?

“I am not in favour of the widespread opening of shops on Sundays and at night. By not extending the opening hours of supermarkets and department stores, we protect small business owners, a class of businesses that visitors and tourists are particularly fond of. It seems also important that the special status of Sunday be preserved. But Sunday should remain an active day and I will pursue the opening of certain public services on Sunday as well as businesses in areas with a large tourist presence.

IN PICTURES: Future Paris: What's new for 2014 and beyond Some people complain about the love locks on the bridges of Paris. Do you want to remove them?

I find it to be a quite touching gesture, I understand that couples who pass through want to leave a symbolic mark on a city that meant so much to them. However, a problem arises when there are so many locks that the railings of the bridge begin to bend under their weight. It may be dangerous. Our priority is to ensure the safety of passers-by, which may involve removing locks when they become too heavy.

The Parisians have a reputation for being rude. Is this fair? How can you make them happier?

That’s a caricature! Parisians have personality, but they are kind people. It is true that with their great sense of mockery, they like to make fun of themselves saying they whine a lot. In reality, all the Parisians I meet are happy and proud that their city is the top tourist destination in the world. They are aware of their mythical city, the city of the Commune and the Liberation.

Without understanding these moments of insurrection, one can neither understand Parisians nor Paris. This is a rebellious city, whose power has long been considered dangerous. Parisians also believe that to live in Paris you have to earn it, so there are many pleasures to living in Paris but life can be tough too. In general, people are proud to be here and are open to the world. They are individualists, but who stand together.

Do you think Paris would be better if it was a more international city like New York or London? Or do you think it is important to keep its French soul?

Paris is a very cosmopolitan city. It attracts lots of foreign students and entrepreneurs and I am delighted.

In recent years, investment in culture has more than doubled. Working class neighbourhoods particularly lacked libraries, cinemas, exhibition halls and other creative spaces. In total, we spend €325 million on these projects every year.

“Paris continues to inspire many artists. The cinema is proof! On average, every day, ten film shoots take place on our streets. Movies such as Paris Moulin Rouge with Nicole Kidman, Midnight in Paris by Woody Allen or Amelie were seen worldwide.”

Hidalgo's opponent Nathalie Kosciusko-Morizet had the chance to answer the same list of questions but so far has not responded to The Local's request.