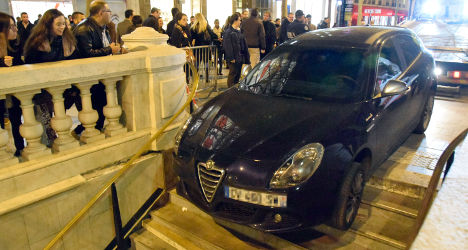 A driver had more than the usual trouble parking in Paris this week. Photo: Mana Laufa/AFP

A driver was so focused on parking his car on Wednesday night it seems, that he failed to notice he was pulling into a Metro station and not a car park.

The driver zipped off the busy Avenue Champs Elysees and drove onto the pavement towards what he believed was a car park, but it was only after making it down several stairs that he realized his mistake, French daily Le Parisien reported.

French media reports didn’t say if anyone was injured or if alcohol was a factor in the parking gaffe. However, photos from the scene show onlookers laughing, some as they climbed past the car on their way out of the Metro.

"A bloke who confused an entry to the underground car park with the entreance of the Metro," tweeted Sofiane

Given the Metro has over 300 stations in the City of Light and Paris hundreds of thousands of drivers, run ins between cars and Metro stations aren’t that rare. In April 2012 a 26-year-old man, who police determined was sober, also ran into some parking problems.

He drove his SUV partly into the Chausee D’Antin Metro entrance before he realized it wasn’t the parking garage where he’d planned to leave his car.

“There is a sign “Hausmann Car Park, Department Stores” that is just in front of the Metro station and as there’s no pole in front of the stairs, I got confused,” the driver, identified only as Johan, told Le Parisien. “Luckily there was nobody on the stairs.”