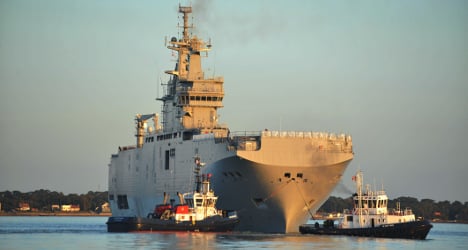 France will not make a decision to scrap its controversial deal to sell two Mistral warships to Russia until October. Photo: AFP

France said on Thursday it would not make any decision about whether to suspend a controversial warship sale, worth €1.2 billion, to Russia because of the Crimea crisis until October.

The first warship, already dubbed the Vladivostok, was floated out in western France last year and is set to be delivered to the Russian navy in October. The second is still under construction.

"The delivery of the first boat is due in October, so the question of a suspension will arise in October," Defence Minister Jean-Yves Le Drian said, a day after Germany cancelled a major arms contract with Moscow.

The 2011 sale of the Mistral warships, worth €1.2 billion ($1.4 billion), was already a deep source of concern for France's NATO and European Union allies, coming only a few years after Russia's invasion of Georgia.

Moscow, meanwhile, defiantly responded that it would "enforce its rights to the end" if France broke the contract and would ask for compensation.

Yuriy Borisov, deputy defence minister, said the contract provided for penalties if it was broken, but did not say how high these were, adding any breach in the deal would damage France's reputation globally.

Germany on Wednesday blocked defence group Rheinmetall from proceeding with a €100 million contract to build a training camp for Russian forces, saying any military deals in the current context would be "indefensible".

But with 1,000 jobs dependent on the Mistral deal, France has been reluctant to put it on the line as part of western efforts to force Russian President Vladimir Putin to negotiate a resolution to the crisis.

"Now is the time for firm diplomacy to avoid any escalation," Le Drian said.

"The hypothesis of military intervention seems to me to be ruled out at the moment because I have confidence in the diplomacy that is underway."

Le Drian said he would be meeting Friday with defence ministers from Poland and the Baltic states to express solidarity with them and discuss security issues.

Earlier this week French Foreign Minister Laurent Fabius hinted that France could scrap the deal with Russia if Putin "continued what he was doing".

Fabius said he "could envisage" blocking a contentious deal to sell two Mistral warships to Russia as a result of Vladimir Putin's stance towards Crimea and the Ukraine crisis.

"If Putin continues what he is doing," then the sale

, said to be worth around €1 billion ($1.4 billion) could be off. But that drew an angry response from Russia.

Fabius said added that other European countries would also have to impose similar sanctions, notably the UK, but also called for calm over what he said was the biggest crisis in Europe since the end of the Cold War.

The Mistral, the second-largest ship in the French navy, is a high-seas military base that can transport up to 16 helicopters, four landing craft, 13 battle tanks, and hundreds of combat troops.

Experts consider the addition of the Mistral to Russia's ageing fleet as a major leap forward in the Kremlin's ability to act quickly with lethal force. 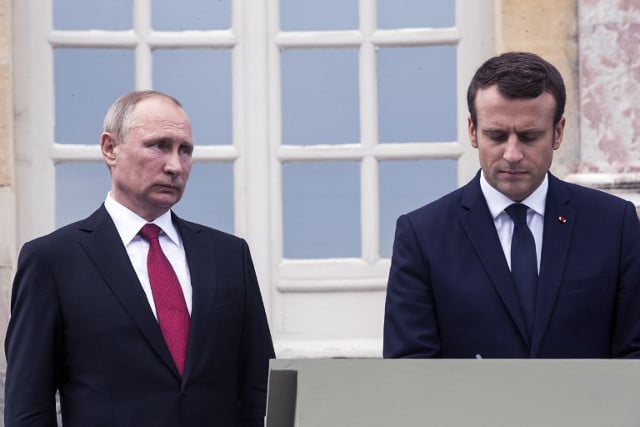