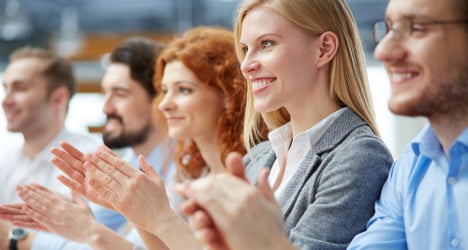 Many expats coming to France, a country renowned for its generous paid holidays and benefits, would be happy simply working anywhere.

But a new study released this week has revealed the 'best' companies in France to work for and many of them are indeed Anglo firms.

The branches of Mars, Pepsico and Microsoft in France took three of the top five spots in the rankings that honoured companies with over 500 employees that treat workers the best and keeping them the most motivated.

McDonald’s, Procter & Gamble as well as General Mills also made the top ten, according to the Great Place to Work Institute, which carried out the study.

Though the rankings have been around for 12 years, this year was the first time a French company, Davidson Consulting, won the top spot for a company with more than 500 workers. In 2013 Microsoft France was the country’s best employer in this category.

The institute's France Director Patrick Dumoulin said there is a difference between the culture in French and Anglo companies, however the gap is steadily narrowing.

"In Anglo companies people like to compare themselves, talk about their income, show their ambition. In French companies you have to be more reserved on these fronts,"  Dumoulin told The Local.

He noted a French company was absent from the top of the ranking for so long because they faced "very, very, very tough competitors, who pushed French companies to do better."

Below are the top ten best companies in France to work for, with firms with over 500 employees listed on the left and those with under 500 listed on the right.

French workers are generally well protected by the country’s labour laws and are entitled to benefits like five weeks of paid holidays, restaurant vouchers and a 35-hour work week. But this study, which companies must pay to participate in, takes into account somewhat less tangible strengths like trust in management, pride in work and atmosphere.

As an example, Great Place to Work pointed to Mars' offices which are in an open space format for workers of all levels, including the head of the group. The idea is to open up communication by knocking down barriers between levels of the hierarchy.

The French company Davidson Consulting's attitude was strong on intangible benefits and promoted an atmosphere that may sound familiar to American or British workers.

“We highly value the quality of the atmosphere at in our offices. A colleague who has low morale or who feels that they are thought of as a number will not be as fulfilled and will not offer the same quality of service to the clients,” Davidson President Edouard Mandelkern told French daily Le Figaro.

The company has banned meetings that are  “boring or a waste of time” and has only one regular meeting that is held once a week and lasts an maximum of an hour. Davidson Consulting also organizes company sports outings, like skydiving and plans to have a group of nine young workers share an apartment.

Do you work at any of the companies listed above? Let us know if they really are one of the best places to work.