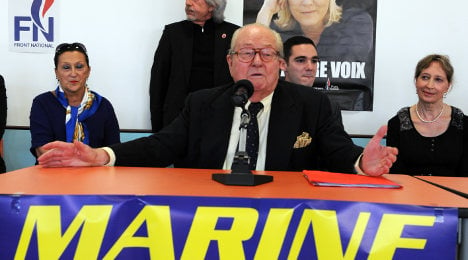 "There would be no foreigners on my list". Anti-EU Jean-Marie Le Pen unhappy about the prospect of foreigners from his own party being elected. Photo: Mehdi Fedouach/AFP

The controversial founder of France’s far-right National Front party Jean-Marie Le Pen said he wouldn’t want any foreigners standing in the local elections for his party. The only problem for him is that 80 expats have signed up as candidates.

The fact foreigners have been included on the electoral lists for Rassemblement Blue Marine, the far-right coalition led by Marine Le Pen, has not gone unnoticed in France.

The media have enjoyed highlighting the discrepancy between the fact that the National Front is against foreigners having the vote, let alone standing as candidates to become local councillors in their own party.

But with 80 foreign candidates, including nationals from Belgium, Portugal, Romania and Bulgaria, Jean Marie Le Pen faces the prospect of having elected expats among his own party.

“Personally I wouldn’t have taken foreigners on my list,” he told BFMTV. “I am not pro-European, I am Eurosceptic.”

Le Pen obviously disagrees on this point with his daughter who appears more pragmatic.

Marine Le Pen, who said back in 2011 that “only the French should be able to choose their representatives in France”, appears to have had a change of heart.

"Seeming as though the law is there, there is no reason to stop a few people taking advantage of it," she said, before stating that the rules will probably change "when Europe no longer exists".