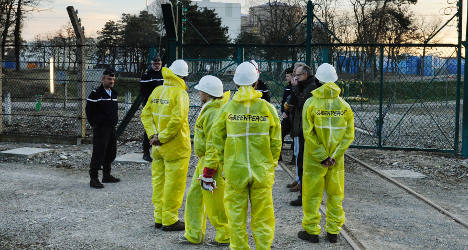 The action by Greenpeace activists prompted Ecology Minister Philippe Martin to take immediate steps to make sure the embarrassing break-in does not happen again.

In a statement, he said he would "ask operators to reinforce the physical protection of the most sensitive zones in their nuclear facilities", by asking them to put up protective devices such as high-voltage barriers.

The 60-odd activists broke into the Fessenheim plant in eastern France near the border with Germany and Switzerland and hung a banner reading "Stop risking Europe" on the side of one of its reactors.

The action, which the environmental group said aimed "to denounce the risk of French nuclear power for the whole of Europe".

The ruling Socialists' Green partners welcomed Tuesday's protest, which they said "shed light on the fragility of our nuclear installations".

The break-in ended late in the afternoon, and state-run power firm EDF,which runs the plant, said it had had no impact "on the safety of facilities, which functioned normally."

Police detained 56 activists, around 20 of whom managed to get onto the dome of one of the reactors as a police helicopter hovered above.

France, the world's most nuclear-dependent country, operates 58 reactors and has been a leading international proponent of atomic energy.

Hollande has pledged to close Fessenheim, which was commissioned in 1977,by the end of 2016 — a promise re-affirmed Tuesday by Martin.

The plant, located on the banks of the Rhine, is considered vulnerable to seismic activity and flooding.

But Thierry Rosso, the man in charge of the Fessenheim plant, said the protest "shows that it is not possible to access the most important zone" where the sensitive nuclear installations are located.