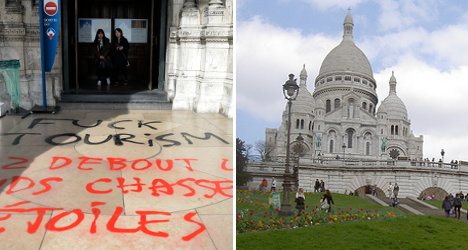 "F**k tourism" and other slogans were spray painted around the Sacré Coeur in Paris by anarchists on Wednesday. Photo: AFP/philole/Flickr

Visitors to the Sacré Coeur, which draws ten million people a year, arrived on Wednesday morning to find entrances and steps to the striking white stone monument covered in a black and red political graffiti.

The slogans ranged from anti-religion "No god, no master, no state," to "1871, long live the commune," a reference to an insurrection in Paris against the government that began 143 years ago on Tuesday.

Apart from the historical references, the vandals scrawled "F**k tourism" and "Burn me," on the famous monument that sits atop Montmartre, one of the city's most visited neighborhoods.

The basilica is normally closed between the hours of 11pm and 6am every night. An investigation has been opened up by police in the capital's 18th arrondissement. Those responsible for the basilica are set to file an official complaint.

Authorities have not said who they believe was behind the graffiti attack but the finger of blame is being pointed at extreme leftist groups.

The reaction from Paris's politicians was swift and severe with several condemning the graffiti as a "desecration" of the basilica.

The country's Interior Minister Manuel Valls said it was "an offense to Catholics and a serious attack on a monument that is an icon of Paris's architectural heritage."

Businessman and candidate in Paris's municipal elections Charles Beigbeder called it "anti-Christian hate" in a tweet.

"Profanation of Montmartre: Anti-Christian hatred has no limits. I strongly condemn this attack," he tweeted.

Paris mayoral candidate for the conservative UMP party Nathalie Kosciusko-Morizet said she was "shocked by the desecration at the Montmartre basilica which I strongly condemn".

Kosciusko-Morizet said "enough" to violent acts of desecration. "The increase of these violent acts and this desecration calls for a strong reaction. That's enough!" she said.