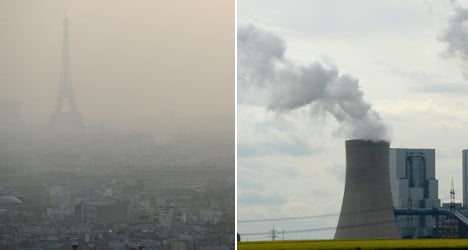 Is that pollution from German coal power stations blowing towards Paris? Photo: AFP

Was Germany really to blame for the fact that half of motorists in Paris were not able to use their cars on Monday? Or for the €16 million hole in state coffers due to authorities making public transport free?

The driving curbs were imposed by city chiefs in the capital to try to tackle last week’s soaring pollution levels, which they said were posing a risk to the public's health.

The problem was caused by the number of fine polluting particles in the air, which are dangerous as they can get deep into the lungs and the blood system and cause respiratory problems and other serious health problems including cancer.

But some have suggested that Paris traffic was not the only dirty-air culprit.

Questions have been asked over whether it is also linked to Germany's increased use of coal power stations after Berlin decided to phase out the use of nuclear energy in the aftermath of the 2011 Fukushima disaster.

Writing in the financial newspaper Les Echos this week writer Didier Julienne, a specialist in natural resources, said: “On European maps of particle pollution this week, the winds from the east, coming from Germany, are heavily laden with particles."

The writer pointed to the "unfavourable environmental situation" in Germany because of the increased use of coal powered stations, especially those in the west, near the borders with France, the Netherlands and Belgium.

“Effectively Germany is smoking us out,” Julienne said, adding that the last few days are an ominous sign of what is to come.

“For the last two weeks we were introduced to the air that risks being ours over the coming years. A kind of Chinese air," he said. He concluded that trying to limit the use of French cars is not as useful as asking the Germans to close down their power stations.

The wind blows both ways

But is Germany really to blame? Representatives from Germany’s environment ministry admitted to Le Figaro that coal production had increased dramatically in recent years, but insisted that new power stations were less polluting.

“The scenario of massive air pollution coming from Germany seems unlikely to us,” the ministry said.

A scientist from Germany’s Federal Institute for the Environment also doubted Germany was to blame for the Parisian smog and made the point that the wind blows both ways.

Air specialist Marion Wichmann-Fiebig said coal-power stations were responsible for ten percent of the emissions of the fine polluting particles.

“We are also subject to pollution coming from Poland, or even France. In one year our systems calculate that our exchanges of polluting particles are about even,” she said.

Le Monde newspaper notes a 2011 study by Airparif, which monitors air quality in France and looked at the origin of PM2.5 particles in France. These are considered the most dangerous because they can penetrate the lungs and the blood system.

But Airparif’s president Bernard Felix poured cold water on the idea that Germany was to blame for the pollution spike.

“The imports of fine particles from abroad are very variable depending on the wind. For two days out of three, in the Ile-de-France region, we have winds from the north-west. Winds from the east are rarer. Most of the pollution episode that we had did not come from Germany,” he said.