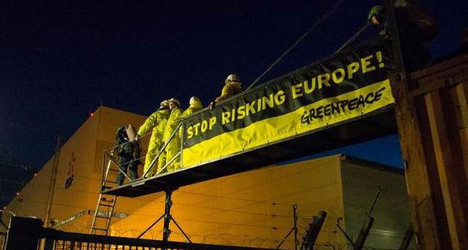 The activists who include nationals from several European countries including Germany, the Netherlands and Italy broke into the Fessenheim plant in the early hours of the morning.

Some of them climbed up to the roof of part of the plant next to one of the nuclear reactors to unfurl a banner reading “Stop risking Europe”.

The protest stunt, which is not Greenpeace’s first at French nuclear power stations, comes just days before European heads of state are set to meet to discuss the future of Europe’s energy industry.

Greenpeace wants French President François Hollande and German Chancellor Angela Merkel to push Europe towards real energy transition, rather than really on either nuclear power, as is the case in France or coal power, in Germany’s case.

“The aging nuclear plants in France and coal plants in Germany and Eastern Europe should be abandoned in favour of a massive development of renewable energy across Europe,” said Cyrille Cormier, who is head of Greenpeace’s Energy Campaign in Europe.

“This is the only option to push through a real energy transition, that would create jobs and also  have economic benefits,” he said.

Greenpeace chose Fessenheim – France’s oldest nuclear power plant – to stage their stunt because of the particular dangers they say it poses to Europe.

“The reactors at Fessenheim are 37-years-old. Fessenheim is located close to the borders of Switzerland and Germany in a zone exposed to the risks of eathquakes and flooding and has serious security problems,” Greenpeace said in a statement. “More than seven million people live within 100km of Fessenheim,” it added.

A spokesman for state-run power firm EDF, which runs the plant, said it was functioning normally despite the break-in.

"These actions will not have any impact on the working of the plant which is functioning normally," the spokesman said.

Police had detained 56 activists, he said, but 20 remained on top of the dome of one of the reactors as a police helicopter hovered above.

France, the world's most nuclear-dependent country, operates 58 reactors and has been a leading international proponent of atomic energy.

Earlier this month French and German anti-nuclear activists took part in a protest against the nuclear powerplant of Fessenheim, calling for its closure.

The French government has plans to close the power plant, after Hollande made it one of his pre-election promises. However no firm date for its closure has been set.

Earlier this month The Local reported how Greenpeace pulled off another protest stunt when they dumped tonnes of coal and several litres of contaminated water outside the presidential Elysée palace in Paris, just hours before Hollande was set to meet Merkel.