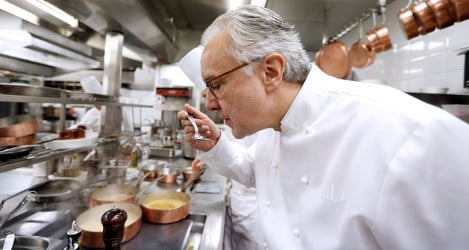 French gastronomy is so unique that Unesco took the step of ganting it heritage status. But times are changing it seems and French culinary habits and dishes and dishes are under threat, the country's top celebrity chef Alain Ducasse says.

The French way of eating is one of the primary cultural and economic assets of the country and France must be "very, very vigilant" when it comes protecting that crucial bit of Gallic heritage, Ducasse says.

In an interview with French magazine L’Express, the renowned chef, whose global restaurant empire holds a total of 18 Michelin stars, said France can be seen as hedonistic or indulgent for its way of eating.

“I know of no other people in the world able to spend as much time around a starter, main course and dessert menu and have as main topic of conversation what we ate the day before, what we are eating now and what we will eat tomorrow,” he told L’Express about the French food obsession.

Yet people’s growing fear of what they eat, either due to concerns over allergies, dietary restrictions or recent food quality scandals have put the French model under threat.

“If our way of eating disappeared, Anglos would be the first to get upset,” he said. “In order to protect the cultural exception that is our cuisine, we must, without sinking to alarmism, be very, very vigilant.”

The chef said the best way to protect France’s culinary heritage is to not lose sight of the fundamentals: the quality of the products, correct cooking and seasoning and a willingness to allow oneself to experience pleasure while eating.

However, Ducasse does recognize the world of food is changing and even admitted the importance of a North American trend.

“We are working more and more under the pressure of clients who are ‘locavores’, which is the name given to an American-born trend that consists of eating only products grown or raised within several hundred kilometres,” he said.

“This new concern compels us to take our responsibilities seriously regarding the limited resources of our planet and the environmental impact of our materials," Ducasse says.

Ducasse’s words come as the French way is under assault in kitchens and restaurants across the country.

“In the land of gastronomy, fast food has become the king,” wrote French magazine Le Point in 2013,  when news broke that sales at fast food outlets had for the first time outperformed traditional sit-down restaurants.

With €34 billion in sales, that figure represents 54 percent of the market and reveals a huge jump compared to 2011 when purchases of burgers, hot dogs and pizzas represented 40 percent of the overall market.

More bad news for traditional French food came earlier this year when a study showed one out of every two sandwiches sold in the country in 2012 was a burger, up from one in nine in 2000.

Though perhaps in a sign of a cultural shift, but perhaps not a complete meltdown of the country’s reverence for the sit-down meal, sit-down restaurants accounted for a quarter of the 970 million burgers sold in the country last year.