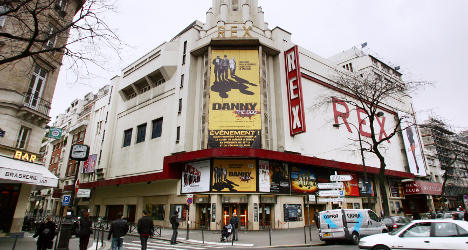 As London and Paris continue to snipe at each other over which city is top dog, there is one area where the French capital indisputably leaves its British rival (and any other city in the world) on the starting blocks – the extraordinary range of films its myriad cinemas have on offer.

London might have its arthouse gems like the Ritzy cinema in Brixton or the Everyman in Hampstead, and of course it has no shortage of multi-screen outlets.

But what Paris has to offer on any given day is simply staggering.

Ten new films went on general release here last week, slightly fewer than the  average weekly crop which usually includes the latest Hollywood fare, four or five French movies and a selection of pictures from anywhere from Senegal to Vietnam.

London on an average week is dominated by American productions, with only the occasional film from Europe or farther afield getting a look in.

The plethora of Parisian places where you can find a couple of hours of celluloid escape puts the city definitively in pole position.

Fancy watching an Indian film in a giant pagoda? Then go see The Lunchbox in La Pagode near the Eiffel Tower, and sip a cup of tea afterwards in its oriental garden. How about a spot of Japanese animation? Head north to the gritty Barbès district to marvel at Hayao Miyazaki's The Wind Rises at Le Louxor, a newly reopened "Egyptian" art deco wonder. (For another art deco cinema marvel buy yourself a ticket for Le Grand Rex)

Or head east along the river Seine to the Cinémathèque française to check out a retrospective season of the works of Taiwan’s Tsai Ming-liang.

Yes, London does have its British Film Institute and another couple of places where the seventh art is taken very seriously indeed.

But it has no equivalent of the swathe of tiny Left Bank cinemas that will stage weeks-long mini-festivals on themes such as Contemporary Russian Cinema, French cinema during the Nazi Occupation, or the entire oeuvre of Howard Hawks.

Nor does London have anything to match the Forum des Images, in the bowels of the sprawling Les Halles shopping complex, where for a few euros you can book a private screening room for yourself, or a bigger one for a bunch of mates, to watch any work from their library of thousands of movies that feature Paris, whether as the star of the show or just as a bit player.

When you have watched your Parisian flick, you can pop next door on the underground Rue du Cinéma and while away an hour or two genning up on obscure directors at the ultra-modern François Truffaut Cinema Library.

The city’s cinematic offerings have burgeoned in recent months with the opening of three spanking new multiplexes, one of them, the UGC Paris 19, hard by the périphérique ring road in the working-class 19th arrondissement.

The most extravagant new project was the brainchild of director Luc Besson called EuropaCorp Cinemas. Located in Aeroville shopping mall near Charles de Gaulle airport, it boasts a live performance space with dance floors, two luxury cinemas with a VIP lounge where caviar and champagne are on offer, an Imax screen, and eight “classic” screening rooms.

With that cinematic horn of plenty available in the City of Lights, Londoners may well feel short-changed. But there is some hope for them.

As Anne Hidalgo, the Socialist politician tipped to become the next mayor of Paris after municipal elections this month, cheekily said, London has become a suburb of Paris thanks to high-speed rail links. So, Londoners, just jump on the Eurostar whenever you feel the need for a celluloid feast.

If you want to guest blog about France for The Local, send in your ideas to [email protected] and we will happily consider them for publication.