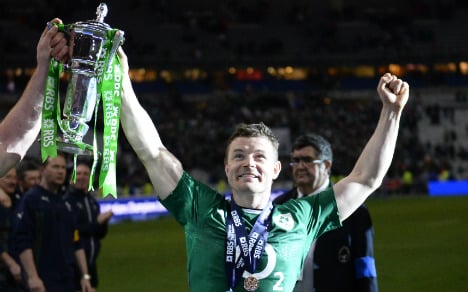 "The emotions are starting to kick in now," O'Driscoll, the world's most capped player, told the BBC.

"It feels great to be a two-time Six Nations winner. So many seconds along the years and so many disappointments, it is great to finish my career on a high.

"When I do hang this jersey up on the hook inside it will be with fond memories.

"I am absolutely delighted. There is a huge Irish contingent here and I am glad we gave them something to shout about."

Jonathan Sexton scored two tries and missed five points with the boot before the Ireland fly-half, who plays his club rugby for Paris-based Racing Metro, was knocked out trying to tackle giant French centre Mathieu Bastareaud.

Ireland then survived a late French rally — Jean-Marc Doussain missing a penalty and Damien Chouly having a try disallowed for a forward pass — to secure their first Six Nations title since 2009.

Earlier on Saturday, England went to the top of the table with a 52-11 victory away to Italy in Rome.

But although England scored seven tries their points difference of +73 was still marginally worse than previous leaders Ireland's +81.

That meant any sort of Ireland win would give them the Championship and, with Wales thrashing Scotland, France — who were title contenders at kick-off — finished fourth.

All England could do was sit and wait for several hours before Ireland's win meant they finished runners-up for the third time in as many Six Nations under coach Stuart Lancaster.

"Credit to Ireland — they are deserved winners and it's a fitting finale and send-off for Brian O'Driscoll, a legend of the game whom everyone in this (England) squad respects massively," said Lancaster in a Rugby Football Union statement issued after full-time at the Stade de France.

England, who beat Ireland 13-10 at Twickenham last month, might have been celebrating a Grand Slam but for a last-gasp loss to France in their tournament opener in Paris.

But Lancaster was heartened by the way his youthful and injury hit side had performed this Six Nations.

"I am very proud of what we have achieved over the tournament, both in how this young group has developed and also our intent to play attacking rugby."

England were 24-6 up at half-time at the Stadio Olimpico after full-back Mike Brown scored two tries and fly-half Owen Farrell also crossed the Italian line.

Then, after Italy were reduced to 14 men by the sin-binning of lock Marco Bortolami, England wing Jack Nowell scored the visitors' fifth try.

Leonardo Sarto pulled one back for Italy before England captain Chris Robshaw scored a try with the last play of the game.

Saturday's second match, which had no bearing on the title, saw two-time defending champions Wales inflict a record 51-3 defeat upon a Scotland in Cardiff.

Scotland were forced to play with just 14 men for nearly an hour after full-back Stuart Hogg was sent off for a late tackle on Wales fly-half Dan Biggar.

The visitors opened the scoring with a Greig Laidlaw penalty but from then it was one way traffic.

"You've got to be ruthless and we were ruthless," said Wales coach Warren Gatland after seeing his side bounce back from last week's 29-18 loss to England.

This was Scotland's third heaviest Test defeat of all time, with their previous worst in the Six Nations a 43-3 thrashing by England in 2001.