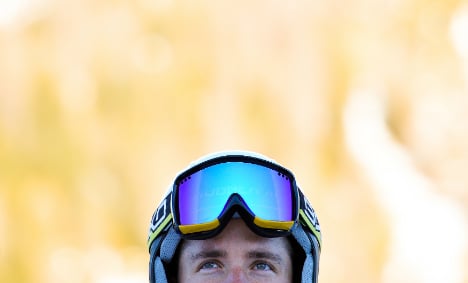 Worthy of a James Bond gadget, these large ski goggles are equipped with an integrated screen in the bottom-right of the view that relays information sent by Bluetooth, wifi and GPS.

Sensors measure not only altitude and the gradient of the slope, but also distance covered, temperature, speed and the height of any jumps.

To really impress your friends, these networked skiers can also download their data once they are back at their lodge, allowing them to compare performances and analyse data.

In addition — by connecting through their mobile phones — the goggles can also locate other wearers on the slopes, share text messages and take incoming calls that flash up on the screen.

A remote control — worn like a large watch — also allows wearers to flick through their music collection.

"It's like being in the future," Damien Chaussin, owner of the shop "L'Oeil du Mont Blanc" at Chamonix, told AFP.

He added that "the idea is very cool, it is the future, but there is currently still a price barrier."

Indeed, the goggles will still set you back about €650 ($900) — the same as an excellent snowboard or pair of touring skis.

They attract buyers, according to several vendors who spoke to AFP, who tend to be over-30s and a little "geeky" and "narcissistic".

The cost is not surprising given that the parts alone cost around €400, according to Recon, the Canadian company that sells the technology to goggle-makers such as Smith, Oakley and Zeal.

"The price is not likely to change next season," said Sylvain Faivre, head of marketing at Smith France.

The American brand said it had sold around 700 of the networked ski-masks in Europe in 2013 — around 200 of them in France.

The market is currently held back by both cost and the limited number of units delivered to stores, and will "evolve gradually but not in big volumes," Faivre said.

Users are still put off by the extra weight of the mask, especially when a camera is incorporated.

Others have suggested a better-positioned screen, as the current version requires users to look down as though at a car dashboard.

There has also been disappointment that a planned project in the popular Three Valleys ski resort in the Savoie region of the French Alps — which would have given users of the mask a wealth of information on its tracks in real-time — is "currently on stand-by due to a technical problem", according to Recon.

Nonetheless, it is only a matter of time before these technologies take off, said Thierry Penet, of Paris-based Laster Technologies, which specialises in digital display technologies in medical, aerospace and military sectors.

"For two years, manufacturers have realised the potential uses for this type of technology in sport. Right now, we are only at the start of this type of usage … but we must prepare ourselves for the emergence of a mass market," he said.