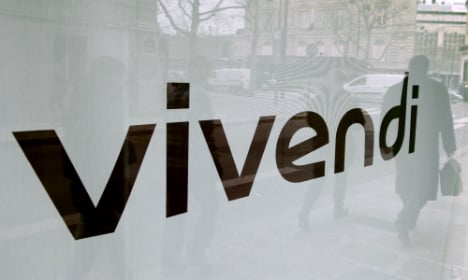 The announcement came just hours after Industrial renewal Minister Arnaud Montebourg took Numericable to task over its multi-billion-euro offer for SFR, challenging the company and its billionaire chairman over their holdings in tax havens and their ability to pay for the deal.

But it emerged that the cable operator had sweetened the offer since, as Vivendi said Friday it has "decided to enter into exclusive negotiations with Altice for a period of three weeks" on the basis of an offer which includes a payment of €11.75 billion and a 32 percent stake in the new entity.

Numericable was facing competition from construction and telecoms group Bouygues which has offered 11.3 billion euros and 43 percent of the new company, valuing SFR at €15.5 billion.

Vivendi has been looking to at least split off, if not completely unload SFR, to raise funds to pay off its heavy debt and focus on its media operations that include Universal Music.

Vivendi said a merger with Numericable "is the most pertinent for shareholders and employees of the group and which offers the best security of execution."

Shares in Bouygues slid 2.9 percent to €30.51. Hours before the group announced its choice, Montebourg had sought to cast doubt on Numericable's offer.

"The managers of Vivendi have decided to sell SFR to Numericable at all costs," the minister said.

The choice "poses a certain number of problems and questions", among which is Altice's ability to foot the bill, and its holdings in Luxembourg as well as the tax status of its chairman Patrick Drahi, he said.

"There is a tax problem because Numericable has a holding in Luxembourg, the company is listed on the Amsterdam stock market, his personal holding is in Guernsey in a tax paradise of Her Majesty the Queen of England, and he himself is a Swiss resident."

"Mr Drahi will have to repatriate all of his possessions and assets to Paris, to France," the minister told Europe 1 radio.

The French government, which is struggling to bring down its public deficit, has been bluntly critical of citizens who keep their assets in tax havens like Switzerland, Luxembourg or Guernsey.

But Altice said Numericable is listed in France where it is also headquartered. Any new SFR-Numericable entity would likewise be based here.

Montebourg noted "Numericable is a small company compared to SFR," adding that "it's a company of five billion that is taking on debt of 10 billion to buy something that it bigger than itself".

"What we fear is over-indebtedness," he said.

Altice did itself no favours in dispelling concerns about its finances by refusing Friday to publish full annual results for 2013.

The possible sale of SFR to Bouygues had been the favourite of many analysts as it would have resulted in the number of mobile networks dropping to three, likely ending the fierce price wars that had eroded profits and slowed investment in next generation services.

While consumer groups expressed concern, regulators had indicated such a merger might be approved after Bouygues announced plans to offload its current network to the fourth operator, Free Mobile, which is struggling to build its own.