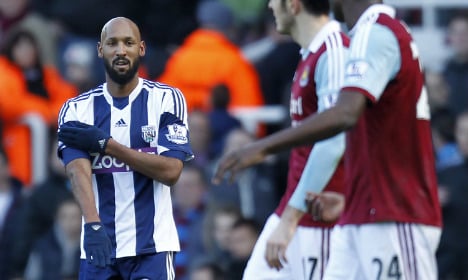 The former France international striker was due to begin a five-game ban for making a 'quenelle' gesture which was widely condemned as anti-Semitic.

"Wishing to keep my integrity, I decided to free myself and to terminate the contract linking me with West Bromwich Albion until 2014 as of now," he said.

He made the statement on Twitter without notifying the club of his intentions in a move which West Brom slammed as "highly unprofessional".

Pockmarked by controversy from its earliest stages, the nomadic playing career of the French striker seems destined to be remembered for all the wrong reasons.

From slanging matches with coaches to controversial goal celebrations, the player born on the outskirts of Paris has been unable to shake off the 'Le Sulk' nickname bestowed upon him by Arsenal fans during his formative years in England.

He appeared to have reached a nadir when he was sent home from the 2010 World Cup for clashing with France coach Raymond Domenech, but the 'quenelle' controversy, which exploded in December 2013, proved that his capacity to shock remained fully intact.

For celebrating a goal with the salute, linked to anti-Semitism in his native France, he was last month banned for five games by the Football Association. It was the latest sorry chapter in a career scarred by scandal.

Poached from Paris Saint-Germain at the age of 17, the lithe, quicksilver striker was one of Arsene Wenger's first signings as Arsenal manager and made an immediate impact in England.

He registered his first goal for the club in a 3-2 win over Manchester United at Highbury in November 1997 and ended the season as a Premier League champion, an FA Cup winner, and England's Young Player of the Year.

After joining Real Madrid in a club-record £23.5 million ($38.6 million, €28.5 million) move, he was banned for 45 days for refusing to train, but returned to play a vital role as Madrid claimed an eighth Champions League crown.

Following an unsuccessful return to PSG, he drifted between Liverpool, Manchester City, Fenerbahce, and Bolton Wanderers, before Chelsea offered him a route back to the upper echelons of the European game in 2008.

In his four years at Chelsea he won another league title and two FA Cups, claiming the Premier League Golden Boot as top scorer in 2009, but there were dark periods as well.

His failure to score a penalty in the 2008 Champions League final in Moscow handed the trophy to United, and it was during his time at Stamford Bridge that his 69-cap France career ended in explosive fashion. Anelka had enjoyed success with France at Euro 2000 and the 2001 Confederations Cup, but he spent three years in the international wilderness after falling out with head coach Jacques Santini in late 2002.

Rehabilitated under Domenech, he went to the last World Cup in South Africa as a first-choice player, but a spectacular outburst at half-time of a 2-0 group-phase loss to Mexico saw him expelled from the squad.

His team-mates boycotted a training session in protest, but popular opinion turned against Anelka once French sports daily L'Equipe reported that he had told Domenech: "Go and fuck yourself, you dirty son of a whore!"

His punishment was an 18-match ban from the French Football Federation, effectively ending his international career, but he met the sanction with scorn, claiming that he was "dying with laughter".

Following unsatisfying spells at Chinese side Shanghai Shenhua and Juventus, he made West Bromwich Albion his 11th club last year and, as ever, drama was quick to follow.

After scoring his first goal for West Brom at West Ham United in December, he celebrated by making the 'quenelle' salute popularised by French comedian Dieudonné, who has been prosecuted for anti-Semitism.

The headlines were his once more, but despite his protestation that he was "neither racist nor anti-Semite", punishment was again quick to follow.

A Muslim convert, Anelka is married to a Belgian choreographer and has three children, and he has previously bemoaned his reputation as a sulking troublemaker.

"People have often complained that I don't smile on the field," he told the Daily Mirror during his time at Chelsea.

"I always say, I smile when there's something to smile about, when there's a goal or something that makes you smile. But I don't go around smiling for nothing. Do you? I'm much more happy-go-lucky than people think."