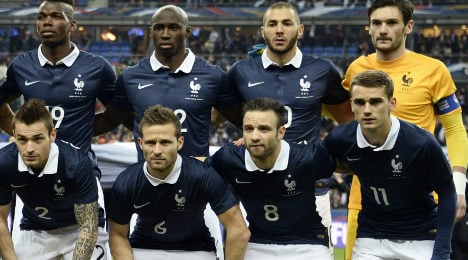 Should the French national team wear "Made in France" strips? Photo: Franck Fife/AFP

When France’s national football team run out on to the pitch at the World Cup in Brazil this summer, their strip may look French, but in fact there’s nothing Gallic about it at all.

Like most clothing these days, the football shirts are made in the Far East, which has angered France’s number one economic patriot, the Minister for Industrial Renewal Arnaud Montebourg.

The minister, who was behind the famous “Made in France” campaign to encourage the French to buy French-made goods, is furious at the lack of economic patriotism shown by the country's football federation (FFF).

“I am not happy. I don’t understand why we go to Thailand to make something that we can make very well in France,” he told RTL radio this week.

“The spirit of 'Made in France' is that all the forces of society and everyone gets involved,” Montebourg added. “The French people must do it on a daily basis to the level of their means and the French Football Federation has the means. So, really, I am not happy.”

Montebourg’s rant resulted in him being the subject of ridicule on Twitter, where he was accused of being behind the times and unrealistic. But he insisted on Friday that the FFF should at least “repatriate” part of the production process to companies in France.

He said football chiefs should negotiate with Nike, the team’s American sponsor, to use subcontractors in France.

And on Friday one French firm, Ultra Petita, based in Toulouse, showed exactly how it can be done by making a shirt for the minister with his name printed on the back.

“It’s magnificent,” said a delighted Montebourg on receiving the shirt. But the reality is production costs in Thailand are much cheaper than in France. It costs Ultra Petita €21 to make the same shirt that costs Nike €5 to make in Thailand, Europe1 radio claimed on Friday.

Europe1 also notes that although Nike’s profit margins are high with the shirts priced at €85, some of that money is ploughed back into grass roots football, with the American sporting giant paying the FFF €42 million a year in sponsorship.

The French public, perhaps unsurprisingly, are backing Montebourg’s call with 78 percent of respondents to a survey saying it is “vital” that the shirts are made in France.