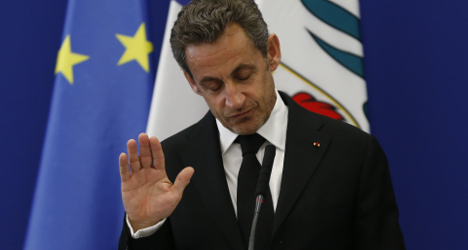 Secret recordings of ex-President Nicolas Sarkozy have been ordered to be pulled from a news website. Photo: Valery Hache/AFP

A French court on Friday ordered a news website to remove the recordings of secretly-taped conversations involving Nicolas Sarkozy when he was president, in what has become known as the "Sarkoleaks" scandal.

Sarkozy and his wife Carla Bruni, who is also heard in some of the private conversations, launched legal action last week after extracts of the tapes secretly recorded by the former leader's then political advisor Patrick Buisson were published on news site Atlantico.

A Paris court ruled that Atlantico — which has already removed recordings involving Bruni on the basis that the model and singer is not a politician — would have to get rid of other extracts still on the site.

It also sentenced Buisson, a former historian and journalist and a self-styled royalist with links to the far right, to pay €20,000 ($28,000) in damages to the couple.

The recordings contain hours of Sarkozy's private conversations with Bruni and close aides, and it is unclear how the extracts available online made their way into the public domain.

While they do not contain any explosive content, the tapes caused a furore in the French political class which denounced an act of treachery by Buisson that could even be a potential threat to national security.

In one of the extracts, Bruni is heard joking about Sarkozy being a kept man and teasing him that her status as first lady has prevented her from signing lucrative deals to promote wrinkle creams.

However nothing emerged from the tapes with the potential to impact Sarkozy's plan to return to politics in time for the 2017 presidential election, unlike other corruption cases he is allegedly implicated in.

Just a few days after the private conversations were published, Le Monde daily revealed that Sarkozy was suspected of attempting to pervert the course of justice by trying to obtain secret information about a court case from a friendly judge.

Investigators got the alleged information when they heard a conversation between Sarkozy and his lawyer after tapping the former president's phones over a separate probe into allegations the late Libyan leader Moamer Kadhafi helped finance his 2007 election campaign.

The phone-tapping revelations — a first for a former president — caused outrage among Sarkozy's supporters and the centre-right opposition has since accused the Socialist government of political espionage over the taps.