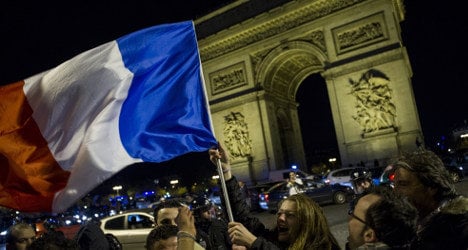 More and more French people are heading to the exits but why are they going? Photo: AFP

Whether it's actor Gérard Depardieu lamenting the greed of the French taxman or US-based Gallic entrepreneurs blasting the efforts of the Socialist government, you get the impression many French think France is not a good place to be right now.

Does a lack of jobs and high taxes really explain why more and more French people, especially young ones, are heading abroad?

What is certain is that the French expat population is booming, with an estimated 1.5-2 million qualified and able-bodied French people calling a country other than their own, home. The number has been increasing by three to four percent per year over the last decade, according to a new study from the Paris Île-de-France Chamber of Commerce and Industry.

That means some 60,000-80,000 French people head through the departure gates each year. And they plan to stay away longer and longer, with about 38 percent of French expats, up from 27 percent in 2008, expecting they’ll be abroad for more than a decade.

In order to see whether it was the country’s record unemployment rates or its “collective depression” that was pushing people to think outside L'Hexagon, as France is known, The Local visited a government-sponsored expat information fair in Paris this week to meet with some of the soon-to-be departed.

The responses from would-be expats show the complex and varied reasons for why they go abroad and their worries over the good things France offers that they will have to leave behind.

'Leaving a stable job in France'

Yannick Warin, 30, is heading to Quebec to follow his girlfriend. He is concerned about leaving a stable job in France and arriving in Canada without any work lined up.

“My girlfriend is already living and working in Quebec” he said. “I’ve already got a work permit and I’m hoping the job market is a bit less tight there than here.”

“The only thing is I have a stable working situation here. I’ve been working at the SNCF (France’s state-owned rail company) for eight years. So to be leaving without a job already lined up is not so great for me. But going abroad has become a rite of passage for workers today.”

But for Yann Dujardin, 34, who is heading down under, the reason for leaving France is simply a question of opportunities.

“I’ve got a three-year contract in Australia and I'm leaving at the end of the month,” he said. “It's a great opportunity because I do research in mathematics and it pays a lot better than in Anglophone countries. They just put a lot more money towards research than France does,” he said.

“As it’s a three-year contract I think I’ll come home after it’s done. But everybody keeps telling me that I’m going to end up staying there,” he said. “But I understand why. I know that coming back can be difficult. You can feel like a foreigner in your own country. We’ll see.” Sophie Ambler (pictured above), 27, who leaves on April 8th and works in communications, is not quite risking all to move abroad. She is taking advantage of a year long sabbatical, for an adventure in China.

“I’m following my boyfriend to Shanghai, where he is launching a French cosmetics business. I figured why not, I’m excited to discover a new country,” she said.

“I took a year sabbatical from my job. So I’ll give it a year. If it doesn’t work out I can come back. If it does I can quit. We’re thinking of staying three to four years in China,” she said. “If we do come back I’m not sure it will be in France. It may be somewhere else in Europe. I’d love to live in England. Why not?”

Unemployed Victor Taing, who came to France 40 years ago from Cambodia is eager to leave to find work, but he worries about giving up the positive things France has to offer.

“I lost my job four months ago and I’m 55 years old. In France it’s too difficult to find a new job at my age. I’ve heard that things are really moving in Asia so I may try it out,” he said. “My biggest question is: will I lose my benefits in France – retirement, healthcare, unemployment?”

But Isabelle Moreau, 50, a civil servant wants to escape the downbeat mood in France.

“We have a lot going for us here, but we’re depressed. I feel like my career is stuck in France. There’s a real lack of opportunity here. Not only that but it seems the government is going to keep pushing up the retirement age. Soon you are going to work until you are 70 years old,” she said.

“I want to be able to retire earlier, and if I go to the United States I can start collecting my retirement five years earlier. Basically, the minimum age drops to 62 if I go the US,” she said. “There’s nothing left to do but find a job.”

SEE ALSO: France can replace its exiles with foreigners For another French couple at the fair, who asked not to be identified, it was not a lack of jobs that makes them want to flee Normandy, just a lack of sunshine.

“We’re going to live in the Canary Islands. The warm weather, the beautiful scenery: it was love at first sight,” the woman said.

“I’m not worried about leaving, our friends are already spread out all around France. We’re already all alone in the region where we live in Normandy.”