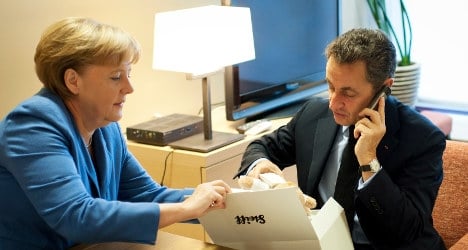 Sarkozy’s lawyer Thierry Herzog could face a lawsuit for illegally using Paul Bismuth’s name to set up a phone the former head of state used to allegedly evade wiretaps that were part of a legal probe.

French newspaper Canard Enchainé claimed to have confirmed Bismuth went to high school with Sarkozy’s lawyer in Paris and was indeed the inspiration for the alias. The alleged connection prompted Bismuth to confront his old friend, fittingly enough, by telephone in an eight-minute call.

"I told him I was shocked and surprised by his actions. I did not pull any punches. He did not really confirm it but played on words and beat around the bush," Bismuth told French newspaper Le Monde.

The closest the lawyer came to owning up to his choice of alias came when Herzog allegedly told Bismuth he used the "first name that came to mind”.

Bismuth, who is now a real estate developer in Israel, said he must make a decision in his “soul and conscience” about whether to proceed with legal action against Herzog.

It’s unclear what, if any, steps Herzog took to avoid showing photo ID to purchase the phone in Bismuth’s name.

The phone from mobile phone carrier SFR was one of two Herzog bought in Nice after his client reportedly became aware his "official" phones had been bugged by investigating judges in September 2013.

The taps were part of a probe into whether Sarkozy took money from deposed Libyan dictator Muammar Gadaffi to in part fund his successful 2007 bid for French president.

However, information gleaned from the phone taps has led to yet another scandal for the former head of state and has put into question his presumed presidential bid in 2017.

After investigators learned of the secret phones purchased by Herzog they tapped them as well. The taps allegedly revealed Sarkozy was being being secretly updated by a magistrate at France’s highest court, the Cour de Cassation, about legal deliberations on yet another corruption scandal.

No charges have been brought in any case, but questions over what the Socialist government of President François Hollande knew about the taps – and from when – has prompted many political salvos in recent days.

The latest scandal is set to run and run.