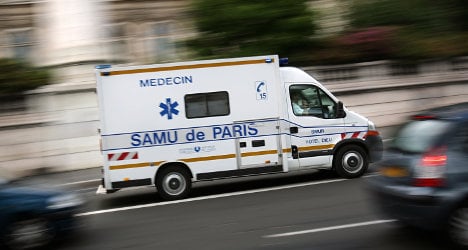 A Frenchman's suicide attempt failed after the bullet he fired into his head became lodged in his sinuses. Photo: Loic Venance/AFP

A man from northern France is alive this week thanks to his sinuses.

The 47-year-old resident of the tiny village of Capelle-lès-Hesdin had at first called paramedics around noon on Wednesday to report that he had shot himself under the chin in an attempt to take his own life and was losing blood, French daily Le Parisien reported.

But by the time emergency crews got to the man’s address no one was there. It turned out he'd got into his car and driven himself to the hospital. After doctors examined him they realized the bullet had apparently become lodged in his sinuses, thus saving his life.

He was rushed by helicopter to another hospital, where he remained alive and conscious. No further information was immediately available about his condition.

France has one of the highest suicide rates in Europe with around 27 people taking their own lives every day. Tragic stories of suicides feature regularly in the French media and there have also been several cases where lives have been spared after suicide attempts were either foiled by luck as in the case with the man's sinuses, or by quick thinking.

In February 2013 a young man from the south of France who announced his intention to commit suicide on his Facebook page was saved after youngsters hundreds of miles away in the north of the country saw his post and alerted authorities.

SEE ALSO: Why does France have such a high suicide rate?