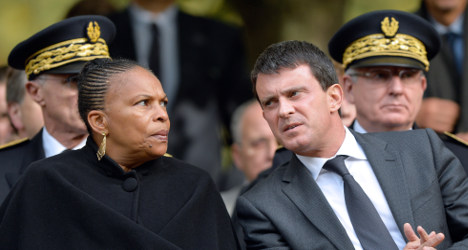 A scandal that initially landed former French leader Nicolas Sarkozy in hot water has boomeranged on to the Socialist government which now stands accused of "political espionage" and threatens a star minister.

Several leading members of France's right-wing opposition, itself reeling from a string of corruption cases allegedly implicating Sarkozy and several others, have called for the resignation of Justice Minister Christiane Taubira over the affair.

The scandal centres on explosive revelations on Friday that Sarkozy is being probed over suspicions he attempted to pervert the course of justice by trying to obtain secret information about an ongoing court case from a friendly judge.

According to Le Monde newspaper, judges allegedly obtained the information as they had tapped the phones of Sarkozy and his lawyer over a separate probe into allegations the late Libyan leader Muammar Gaddafi had helped finance his 2007 election campaign.

The phone-tapping revelations – a first for a former president – caused outrage among Sarkozy's supporters and the focus soon shifted on to whether the Socialist government knew about the taps amid concerns the constitutional separation of powers had been breached.

On Monday, Taubira said she had no prior knowledge of the phone taps and had learnt about them at the same time as the French public. And Interior Minister Manuel Valls said he found out about them by reading Le Monde.

But in comments that contradicted her claims, Prime Minister Jean Marc Ayrault revealed Tuesday that he was informed of the taps much earlier on February 26 – as was Taubira.

Philippe Marliere a professor in French politics told The Local: "This could now affect a number of people as the ball certainly seems to have rolled into the court of the Socialist government. Whether their version of events turns out to be true, only time will tell. You hope for their sake they have told us the truth.

"But the main question here is whether in a democracy we should be listening in to conversations between someone and their lawyer," he adds.

Marliere says lawyer client privilege is "is one the sacrosanct protections" of the French democracy. "This is why the French government could be in trouble," he said.

Jean-Francois Cope, the head of the main opposition UMP party, slammed the phone-tapping as "political espionage", labelling it an "affair of state".

The justice minister "lied" and "it's not possible for her to stay in her post. Her resignation over this lie is inevitable," Cope said Tuesday.

Just 10 days ago, Cope himself was under fire following press revelations that lucrative contracts given out by the UMP party benefited people close to him.

Taubira herself later Tuesday denied having lied, ruled out resigning and said she was not aware of the contents of the tapped phone conversations.

Meanwhile Alain Vidalies, the Socialist minister in charge of government relations with parliament, lashed out at the UMP for what he labelled "a successful smokescreen."