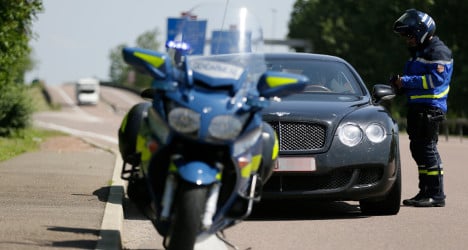 Paris cops wrote a lot of tickets in the past week in an effort to fight pollution. Photo: Kenzo Tribouillard/AFP

Police in Paris have taken it upon theselves to battle against "dangerous" levels of air pollution in the capital by handing out thousands of speeding tickets.

The crackdown was part of a battle by authorities to deal with high levels of air pollution that have been recorded in the capital since the middle of last week. Environmental groups have said the levels of polluting particles in the air are putting people's lives in danger.

Paris's police authority said on Tuesday that because it is "particularly attentive to changes in air quality," it decided to use its legal authority to step up its traffic stops.  As a result, officers carried out over 30,000 vehicle stops since last Wednesday.

On Monday The Local reported that environmental groups in Paris made a formal request to legal authorities to tackle the problem pollution, which is caused by high levels of nitrogen dioxide in the air and can pose a risk to anyone who suffers from asthma or other breathing difficulties.

Dixsaut said certain people in the capital are more exposed than others.

"It used to be the industrial areas [that provided the greater risk] but now it is the main road interchanges. Those people living near them are most affected by nitrogen dioxide that is produced by diesel vehicles.

"Nothing has been done in France about this."

Ecology without Borders (Écologie sans Frontière), Breath (Respire) and Unity for the Planet (Rassemblement pour la Planète) lodged a legal complaint in Paris, on the grounds that pollution levels are endangering people’s lives.

“We are sick of this air pollution,” Nadir Saifi, spokesman of Ecology with Borders told France Info. "As soon as the weather is good, and as soon as it's dry in winter you have these peaks in pollution and the emergency wards at hospitals fill up. Slogans and small demonstrations are no longer enough.”

In another official effort intended to curb air pollution, Paris Town Hall announced that residential parking will be free on Tuesday and Wednesday. The idea is apparently to encourage drivers to leave their cars at home and take public transportation.