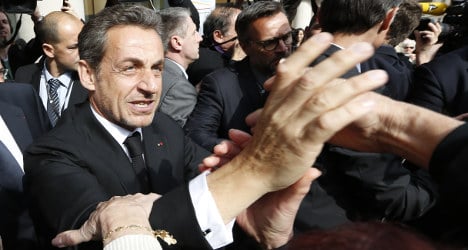 A top court has ruled against ex-President Nicolas Sarkozy on a key matter. Photo: Valery Hache/AFP

A French court on Tuesday threw out a plea by Nicolas Sarkozy against the seizure of his diaries by judges probing a corruption case, in what has the potential to harm his chances of a political comeback.

The former French president appears increasingly threatened by a labyrinthine web of graft cases, and Tuesday's ruling is crucial as it paves the way for the potentially compromising diaries to be used against him.

The documents were initially confiscated as part of a probe into allegations Sarkozy took advantage of France's richest woman, 91-year-old Liliane Bettencourt, when she was too frail to know what she was doing in helping fund his successful 2007 election campaign.

Charges against him were dropped in October but 10 other people, including his former campaign treasurer Eric Woerth, have been sent for trial over the allegations.

Lawyers for Sarkozy had argued that confiscating the diaries was illegal as when in power, he benefitted from immunity from prosecution which should extend to the documents.

But on Tuesday, the Cour de Cassation — France's top court — said there was no need to rule on whether the seizure was legal as Sarkozy is no longer
being probed in the case.

Judges investigating the Bettencourt case can therefore continue to use his diaries, which could also be of use in a separate probe into a huge payout made by the French state to disgraced tycoon Bernard Tapie in connection with the collapse of the Credit Lyonnais bank.

Sarkozy is suspected of having rigged a dispute-settlement procedure to ensure Tapie got 400 million euros ($555 million) as a thank you for his support in the 2007 election.

The diaries are reportedly seen as crucial to the case because they are thought to show how close he was to Tapie.

In an indication of how important the diaries are to the former president, Sarkozy is now suspected of having attempted to illegally obtain inside information about proceedings at the Cour de Cassation relating to the case, according to daily Le Monde.

A separate probe has been opened into these allegations, which are based on a phone conversation between Sarkozy and his lawyer — both of whose phones were tapped by judges probing yet another corruption case involving the late Libyan dictator Moamer Kadhafi.

In that case, the former president is being investigated over claims he accepted up to 50 million euros in cash from Kadhafi for his election campaign.