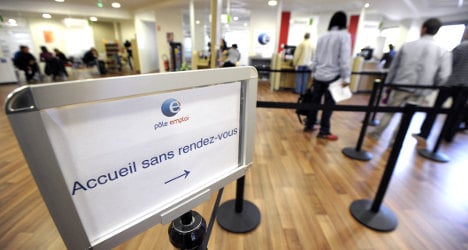 Being unemployed in France is not a bad place to be. But how does it compare to elsewhere? Photo: AFP

For Brits and Americans who are entitled to a mere six months of unemployment benefits back home, the thought of receiving unemployment benefit for two years (even three if you are over 50) could seem like a typically over-generous offer from the French welfare state.

However, the apparent generosity of France's scheme is not as simple as it appears at first glance. While France is in some ways kinder to its unemployed workers, it’s generally on a par with or even below some of its European neighbors according to several key benefit criteria, French magazine L’Express has reported.

In terms of eligibility, French workers need to have worked the equivalent of four months in the past 28 months in order to be able to claim unemployment benefits.

The minimum in the United Kingdom and the Netherlands is six months and you must work for a year in Germany, Denmark, Italy or Belgium before you can get unemployment cheques. Only Sweden and Finland are less demanding of workers seeking benefits, requiring three and four months of work, respectively.

Top Tips if you end up being unemployed in France In France the four-month minimum is a relatively new standard that can be traced back to 2009. That year union leaders managed to convince the government to drop the eligibility requirement from the long-time minimum of six months.

It’s worth noting the people who receive unemployment benefits from the state after four to six months on the job represent a small minority of the overall out-of-work population – about 12 percent. Though under France’s ‘one day worked, one day covered’ principle, those people are only entitled to benefits that last the equivalent of the time they were employed.

The next important point for Gallic benefits is their duration, and France is among the most generous in Europe. In France it’s possible to receive unemployment benefits for up to two years, although if you are over 50 that period grows to a whopping three years.

Only the Netherlands is more generous than France with its 38 months of benefits, while countries like Spain and Denmark have similar limits to France.

Most of France’s neighbors are more restrictive, with maximum benefit duration being 18 months in Switzerland, one year in Germany, eight months in Italy, and a mere six months in the United Kingdom.

However, it’s rare for people to spend 24 or 36 months on unemployment benefit in France because that is the ceiling for benefits. Under the ‘one day worked, one day covered’ principle only 41 percent of the unemployed have worked enough days to qualify for the max.

Only a small percentage of workers, about 11 percent, go beyond 20 months, with the rest finding jobs before their benefits run out.

Will the benefits last?

Numerous proposals have surfaced that seek to cut French benefits, which is not surprising given the staggering sums at stake.

If the government pushed the ceiling down from 24 to 18 months for benefits, it would mean an estimated €2.3 billion in savings each year for France’s unemployment agency. But critics have noted that, while this could push job seekers back to work faster, it would mean more short-term, low-skilled jobs rather than long-term, sustainable work, L’Express noted.

As for how much cash the unemployed make in France, they are about on a par with their neighbours, economist and author Bruno Coquet told L’Express. When all benefits available to an unemployed person in various European countries are taken into account, French benefits pay about 65 percent of what the person made while working.

“It is also the optimal rate to encourage the return to employment,” Coquet told L’Express.

But the system doesn’t treat everyone equally. Unemployed people who used to make a top salary are better taken care of in France than in other European countries, because the ceiling for compensation in France is the highest in the EU at €6,121 gross per month.

However, with an average French worker looking at €2,130 per month in France, the unemployed in France are not as well off as in other neighbouring countries.