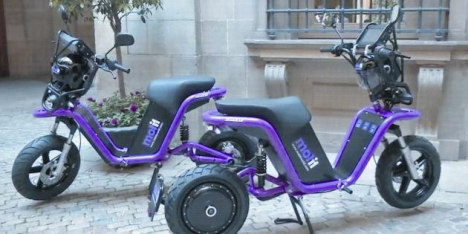 A scooter-sharing system has already been launched in Barcelona. Screengrab: YouTube/BTC CAT

Parisians could soon have access to up to 5,000 scooters parked at 700 different stations around the city and surrounding areas, according to plans revealed this weekend.

After current mayor Bertrand Delanoë rolled out the Velib' bike-sharing scheme and then the ground-breaking Autolib' car version, Anne Hidalgo, the current favourite to succeed him in the hot seat at the Town Hall, wants to take the next step – on two motorized wheels.

“The most important thing is not to see this as a 'pie in the sky' idea,” she said. “This system already exists elsewhere in different versions, in Barcelona and San Francisco. We want to adapt it for Paris, where there is a growing desire to get around on two motorized wheels.”

Scootlib', as the proposed scheme has been dubbed, was initially put forward by the far-left, “Parti Radical de Gauche” (PRG), and is aimed at tackling the lack of parking spaces for scooters in the capital. But the idea has been taken on by Hidalgo, who revealed details of the scheme in the Journal du Dimanche on Sunday.

The scheme would offer those living in the capital and the surrounding suburbs an alternative way of getting around the city and would work in the same way as Autolib' and Vélib' with users able to pick up and drop off scooters at specific docking stations around the city.

The scooters would be electric and therefore silent and environmentally friendly and would have be able to travel up to a maximum of 90km, on one battery charge. The system would work in a similar way to the Vélib bike scheme, with the price of hiring a scooter ranging from between €3 and €10 per hour.

The machines would contain a GPS and would be better protected against thieves, Hidalgo says. They would also come with a helmet inside, that would be regularly disinfected and cleaned.

Renting out the scooters would be done via smartphones or on the internet.

According to a study by a French transport union in the capital, the use of scooters and motorbikes has increased by 34 percent within the last ten years in the Paris region which has led to a serious shortfall in parking spaces. This might explain why walking through the capital’s streets can often feel like an obstacle course due to the number of scooters you have to weave around.

Until recently in France it wasn’t necessary to have a license when driving a scooter with an engine size smaller than 50cm3, however a new French law introduced in January 2013 requires new drivers to follow a formal theory and practical license programme.

The hugely popular Vélib’ is the system of city rental bikes that was launched in 2007 in Paris. For an annual fee of just €29 subscribers can cycle for free on all journeys under 30 minutes. Autolib’, the self-service electric cars, followed in 2011. Before being allowed access to the eco-friendly cars, drivers must first register their driver’s license in an Autolib’ office.

Rival candidate for mayor Nathalie Kosciusko-Morizet said Scootlib’ was not a priority for Paris.

“You would have to make certain that this scheme is not just something that will increase profits for some entrepreneur,” said KNM, referring to the Autolib' scheme which is managed by business tycoon Vincent Bolloré.